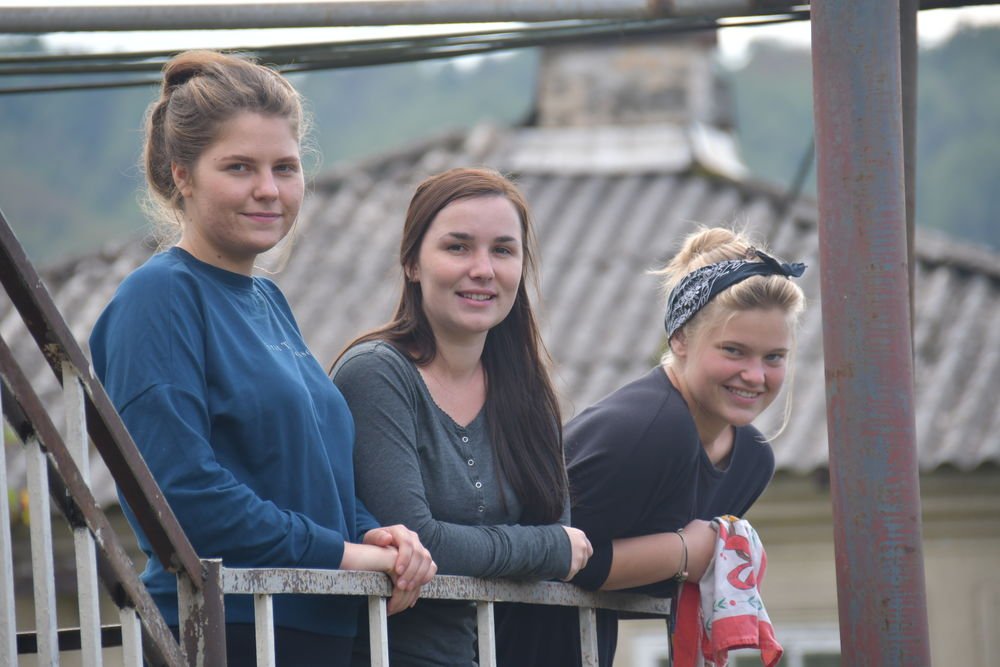 Just imagine what it would look like to live as a teenager in Tkvarcheli. Your house is a two-room apartment in a building, that is more of a ruin than a house, which you share with your parents and two sisters. Dad doesn’t have a job, and spends his time drinking with some old friends. Living with him is difficult. They say he is traumatized by the war 25 years ago. When you come home, you never know whether he is there or not, whether he will be sober or not, and in what mood he will be. Mum tries to make the best of it, but during the summer, she works for some months in a hotel, which is quite far from home. The winters are especially difficult, because there is no regular income. Your youngest sister is ill, but there is no money to bring her to the hospital in the nearby city. Nobody knows whether she will recover or not.

Apart from school, there is hardly anything to do in the town. No sports, no music lessons, nothing. After school you might sometimes go for a swim or hang out with some friends, doing nothing. Many of your classmates have a similar life. Some of them moved away over time. Others are involved with crime. Some are stealing in order to care for their families, but most of them are stealing to buy drugs and alcohol. They just want a few moments to forget the misery in life. Recently your best friend was so desperate that she tried to take her own life. Thank God she survived, but mentally she is still in a bad place. Is there any meaning of life in this terrible mess?

This life is reality for many children and teenagers in Tkvarcheli. Tkvarcheli is a town in the south of Abkhazia, which was severely damaged in the ethnic war with Georgia. The town once flourished as an industrial centre of the region, but 25 years after the war, the town is still shattered, and almost nothing has been rebuilt. Children are on their own and often drawn to crime. These children live under the spiritual oppression of the pagan traditions, which are common among the Abkhazians. In such conditions, the teenage club at the church is a beacon of light for the children and teenagers in the town. It is a place for kids to develop, learn new things and spend quality time together.

One of the local kids is 10-year-old Tamila*. Tamila has several sisters and a mother, who works only in the summertime, when tourists visit this country. Tamila and her friends like to come to the church to spend time there. When this church started two years ago, one of the believers began to work with kids. He organized a movie club, which gathered a lot of kids and teenagers each week. But it was not enough for the ministry with the kids. They had a great need for quality time and activities. OM, who is partnering with this church, decided to send four second-year MDT (Missions Discipleship Training) students to serve a one-year internship with these kids and teenagers.

Just before the MDT students came to this city, the children were told that new people would come and spend time with them. Tamila and other kids were very happy and looking forward to meeting with new friends. Once the four second-year MDT students came for their internship in Tkvarcheli, they quickly became friends with the local children, especially with four girls (one of whom is Tamila).

The students are responsible for the children’s and teenagers’ ministry. They organize a children’s and teenagers’ club twice a week. More than 15 teenagers and children come to play games, have tea and then discuss some topics. Besides this, students show an example of Christian life and God’s love just by living there. Every morning, the students spend time with God and read the Bible. The children see this. One day Tamila got very curious about the book they read. Sometimes she also took the Bible and sat next to the students. She, too, read the Bible and was looking for what was interesting in this book, which didn’t have any pictures.

The students also befriended the parents of these girls, and they allowed the girls to have sleepovers with the students. It was a nice time of fellowship—they cooked dinner together, drew and did some crafts. Before going to bed, they read stories from the Bible.

One of these nights, after prayer, Tamila suddenly whispered words, that touched one of the students. She said: “I really want to be like you, be a Christian. What should I do for it?” The students suggested to pray, and Tamila called on God. “I know that Jesus loves me so much, and died for my sins,” Tamila shared.

Now the Bible is the most important and precious thing for her. She takes it everywhere and always wants to read it. One day Tamila left her jacket at the church, and when her mother came to pick it up, she said: “My daughter has several jackets, and there is Bible in each of them.” Especially Tamila likes to read it with one of the students because she remembers Bible stories better when they read the Bible one-on-one, rather than with the other kids.

The children’s and teenagers’ club at the church has impacted the lives of the local kids very much. They not only hear the truth but also learn how to make different crafts, sing songs and have fun. “I have never made such beautiful crafts,” said Tamila, delightedly.

Tamila and other girls have changed a lot. They care about others, are more obedient and respect their parents. Seeing the practical Christian life of the students, the local children want and try to be like them.

Teenstreet: a congress for young people – but not just for them!