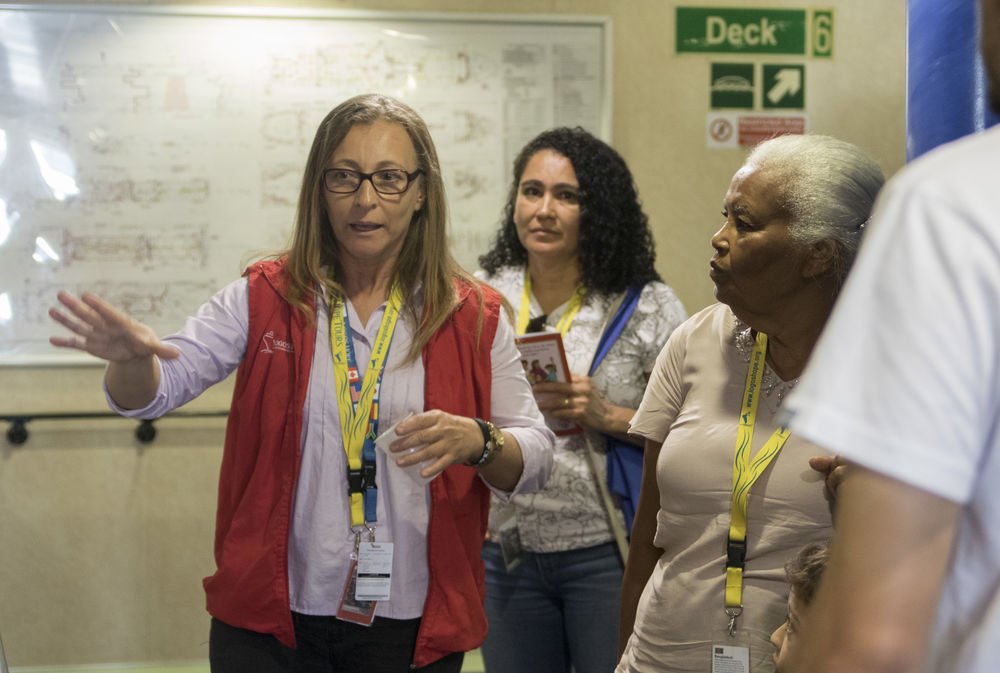 As local volunteers who participated in Logos Hope’s work in Salvador spent their last day on board, crewmembers and leadership esteemed them for the time they had spent in partnership.

Randy Grebe (USA), the director of partner relations on the vessel, told them: “This is not the end; it is the beginning of a journey and I don’t know how to say thank you. May the Lord bless you and make sure your faith always overcomes your fear.”

Jonas started volunteering when the ship was in the previous port, Vitória, and became so keen on the ministry that he travelled to Salvador to help out there too. “When I first stepped on the ship, my heart was transformed,” he says. “The transformation is such that you can only want more.” Jonas prays he will also be able to meet the vessel in the next port, Belém – a six-day voyage round the coast – and serve there too: “I am no longer the person I used to be.”

Priscila is from Salvador. She thought that Logos Hope was merely a floating library where she would have the opportunity to learn English. “I have learnt that it is much more,” she explains. Moved with emotion, she addressed the group at a farewell service. “We are a family; a united community, beautiful and strong. I met people who have a good heart, who talk about the Lord with joy. I would like to thank the crew for the opportunity you have given us to meet wonderful people.” As Priscila spoke, other local volunteers shed tears and shouted ‘Hallelujah!’

One man had visited a previous vessel 20 years back and after all this time, had come back to serve on board Logos Hope. Joas struggled to contain his emotion: “The ships came two or three times before, many years ago.” The first time he visited one of OM’s ships, the experience was so strong that it impacted him for years. “This ship is a blessing wherever it goes,” Joas concluded.

Many volunteers from Salvador exchanged stories of how partnering with different local organisations had impacted them, as well as the many ways in which they grew in their relationship with God. Parting from the crewmembers who had become their brothers and sisters was poignant – but they know they will be reunited one day.

Logos Hope: First Engineer, Operations Ships    Go & Live    As soon as possibleJoin our international team of 400 people from 50 different nationalities. Have the opportunity to invest in young people and use your technical skills to keep a life-changing ministry operating. Being part of the on board community you will also receive personal input through daily team devotions and other ship events as well as the opportunity to experience the culture of the international crew and staff and the countries the ship visits.
Full Details
Logos Hope: Cook Ships    Go & Live    As soon as possibleCater for ships company and guests and assist the Chief Cook when needed
Full Details
Logos Hope: Carpenter – Long and Short Term Roles Available Ships    Go & Live    As soon as possibleAs a Carpenter, you work as part of the Maintenance team who is responsible for maintaining adequate and comfort living and working conditions all around the ship. This includes safe and functional interior and furnishing in private, public and work areas, working sanitary spaces, managing fresh and waste water, air conditioning and ventilation, cold spaces, maintain routine check on various equipment and spaces.
Full Details
Logos Hope: 1 or 2 years on Logos Hope! Get on Board! Ships    Go & Live    As soon as possibleOM Ships International (OMSI) is a faith mission funded through gifts and revenue from the bookfair on board. All crew and staff serve as volunteers who raise their own support.