Disguised in different roles–from rebellious teenagers to homeless people to prostitutes and pimps–community members responsible for the onshore segment of The Agency experience act out the types of least reached people in society. This modern way of reinforcing the mission of Jesus-followers has been very well received amongst participants to OM's Riverboat.

“It has a strong impact on people to see the needs of the world.”

“It lets people get a feel of what it means to be a Christian and it certainly gives a lot to think about.”

A teenage boy learnt that talking and sharing about God doesn’t have to take hours and is not as stressful as he thought. “It can also be a short, simple conversation with someone,” he said. Another boy, on hearing the pseudo story of the ‘homeless person’ who fell from a high position in the company and ended up on the streets, immediately drew parallels with the story of Jesus – how He came down onto earth to take on the position of a sinner.

It is important for actors to remain in character even when coming out of character and evangelising seems like the natural thing to do. By protecting the experience for the participants, the actors direct participants into thinking more about their faith and missions through leading questions.

The efforts are worth it, and the convincing acting has stirred the hearts of some participants. A teenage girl declared, “This is not okay! There is so much injustice in this”, when she saw the hurt of the ‘prostitute.' Another group took off their coats to offer to the ‘homeless people,’ in a desire to show love and care. In fact, people passing by wanted to help as well, thinking they were really homeless; their acts of kindness greatly encouraged community members.

When Kristy Samaroo (Trinidad and Tobago) acted as an atheist arguing against a religious fanatic, a girl suddenly came up beside her and supported her in the argument. “I don’t believe in God either, it just doesn’t make sense to me,” the girl echoed her sentiments. After the simulation ended, Kristy realised to her surprise that this girl was just a passer-by and not one of the participants. As the girl walked away, Kristy ran after her to explain what just happened and that she is, in fact, a believer of Christ.

“If the God that I believe in exists, and you could have one wish, what would it be?” asked Kristy, applying what she had learnt from the One Wish training.

“I ask that God can remove my depression.”

Kristy’s heart broke for the girl and she prayed for her. She hopes that God will show her that this meeting wasn’t a coincidence and reveal Himself to her.

Actors of The Agency have witnessed many people, especially teenagers, gaining confidence in their faith and courage to share the gospel through the simulation. When one actor challenged a teenage girl, “How can you believe something you can’t see?” The girl replied, “It’s not 'seeing is believing', but 'believing is seeing.'” Praise God for these responses and may the next generation rise up to take on the mission as ‘certified agents.' 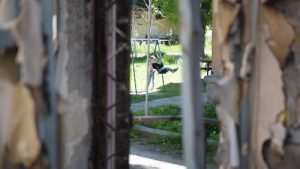 The Hero Pastors of Ukraine

Serving People – Volunteer at Hospitality Centre Germany    Go & Visit    Various Dates: See DetailsDo you enjoy serving people and want to make them feel loved and welcome? We need volunteers for our guest house where people get informed and mobilized for missions.
Full Details
All Service Opportunities
All Visit Opportunities