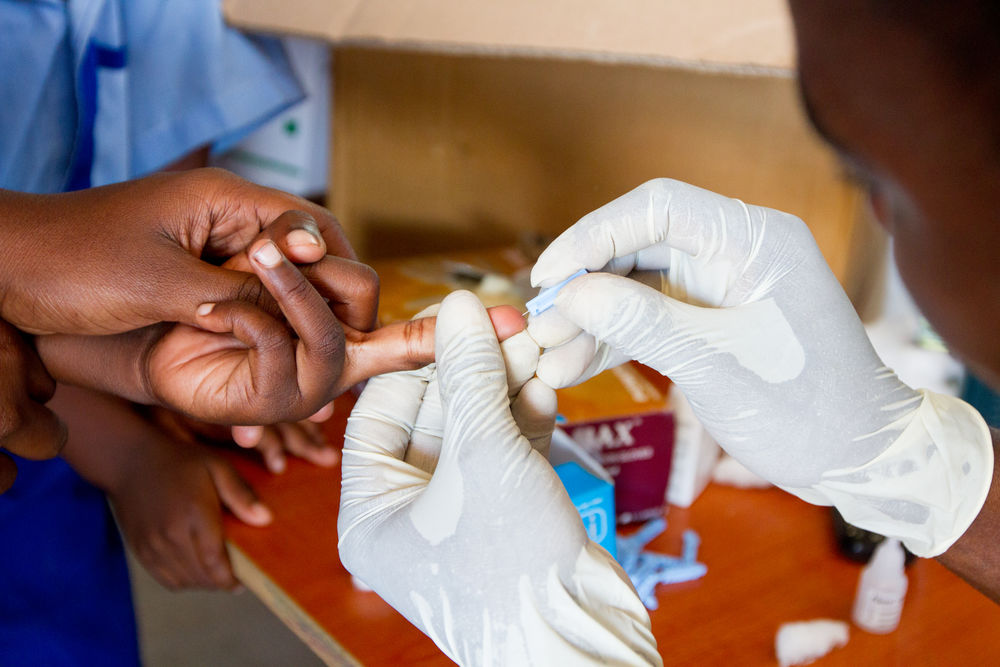 When Wilfred* went to get tested for HIV, he didn’t know much about the disease.

“He thought that HIV was just like a normal cold—you’ll get over it,” remembered Nigel. “Take the medication, take it for a few days, and it’s finished.”

Nigel (South Africa) and his wife, Holly (USA), moved to Zambia in 2015 to work with AIDSLink**. In Zambia an estimated 1.2 million people live with HIV—over half of whom are women***. Around 87 per cent of the people living with HIV in the country know their status** as many people aren’t aware of the symptoms, have no access to get tested or are afraid of the stigma surrounding HIV and AIDS.

Noticing reoccurring symptoms, a friend connected Wilfred, who is deaf, to Nigel. As moral support, Nigel then went with Wilfred to get tested for HIV. During the counselling session after being confirmed as HIV+, Wilfred was shocked to learn about the effects of the disease and that he would be on medication for the rest of his life. He had had no idea.

Five kilometres off the main highway down a sandy road is Kangomba village, where the AIDSLink team meets once a week to offer pre and postnatal care talks at the clinic.

Each session opens in a word of prayer before diving into a variety of topics, though there is a specific focus on ensuring that the babies will test negative for HIV when born. Afterwards, the team offers to meet one-on-one with anyone to pray or just to talk. “We want them to be saved, but it is a trusting relationship that’s going to be built over time,” said Holly.

Holly and Nigel have found that trust is key when working in communities and needed to be built with the clinic as well. “How we got into doing the pre and postnatal care is by listening to the clinic,” Nigel explained. “It was a gap that needed to be filled, and when the medical staff asked us would we be willing to do this, we took it prayerfully on board, and that is what really opened a lot of doors for us.”

When Sarah* found out she was HIV+, she wanted to commit suicide. Her abusive husband had cheated on her, and she was the breadwinner for her five children and pregnant with the sixth, though she didn’t know it yet. After hearing about Sarah’s situation from a friend, Holly and other team members began visiting and encouraging Sarah that there was a way forward. Over time, Sarah accepted Christ as her Saviour and found peace and hope in Him.

It’s not always easy, though. Sarah faces stigmas from the community, especially regarding her youngest daughter. Though the child was born negative, any time she gets sick, people muse that she must be HIV+. “Even if [Sarah] is educated now, most of her community is not,” Holly said.

One of the challenges faced by those living with HIV in Zambia is the stigma attached to the disease. Lack of knowledge and misinformation build up and can be hard to rectify.

“People are excluded from the young to the old,” Nigel said. “[There are] wrong doctrines where you have churches telling the people to throw away their medication because they will be healed, and if they’re not healed, then that means they don’t have enough faith. So it’s a whole mixed bag of things going on.”

“Some people will come to us and say: ‘You are the first person I have ever told that I am HIV+ or that my family member is,’” said Holly. “They have carried it with them for so many years because they are afraid of rejection; the stigma that will come if they say what their secret is. I appreciate when people trust us.”

In Zambia, AIDSLink believes that prevention is better than cure to which education is the only way. AIDSLink has a variety of ministries such as providing HIV and AIDS testing, pre and post-test counselling, teaching HIV and AIDS education to children and youth, running an after school programme, holding workshops and trainings to raise awareness as well as working in two government-run clinics, giving health talks and doing follow-up home visits.

**AIDSLink International works in partnership with OM to impact the worldwide HIV and AIDS pandemic.