In one Southeast Asian country, several of OM’s ministries face being closed down, not because of persecution but rather because of the threat of economic strain connected with the coronavirus crisis. If the country’s borders are closed and the government announces a lockdown of some sort, then the team-run businesses, which are a sustainable part of the ministry, would have to close, too.

“All of our national staff and about 85 per cent of those in our discipleship programme are employed through our businesses. Their salaries are paid through those businesses,” Derek*, who oversees ministry in the country, explains. “Not having any income from our businesses could kill all of our businesses. We’d have to lay off staff or not pay them a salary for the next few months, which means they [wouldn’t be able to] buy food.”

In addition, several of the discipleship programme participants send part of their monthly salaries, earned while working at one of these businesses, home to their families. And, of course, the families of every staff member depend on their income. The ripple effect of the loss of income would be damaging to many.

While the government hasn’t announced anything official yet, borders are expected to close shortly. This would most likely lead to food security issues — as the country is “very dependent on the other countries around. Maybe about 80 per cent of industrially manufactured goods in the capital are imported,” explains Derek. For those countries that don’t produce enough food for their population, the complete closure of borders could lead to people panicking. “Prices here — for basic necessities like rice and other staples — have already risen quite sharply, and we think that they will continue to increase as the situation changes.”

“You hear rumours of an entire village that is sick with a fever and the government is telling them they can’t tell anyone,” Derek says, “or of someone who just came out of a government meeting, saying that they’re going to shut everything down… [or] ‘to go buy rice and stock up while you can or you won’t have enough to eat’ — but no one knows where this [infected] village is or has any reliable sources for these stories.” Derek has seen that these kinds of rumours scare people, causing them to rush to markets and stockpile more than they need, which then scares other shoppers, who feel the need to buy more, too.

Even though there are no reported cases in the country, Derek shares that some people, despite not having any symptoms, feel so anxious that they go to a hospital to be tested. “People are definitely very scared of the virus. We already had one team member leave our discipleship programme because his family felt that the capital city wasn’t safe, and they wanted him to come home.”

Up until now, life and ministry has continued as normal, but things can change quickly. International travel has become tricky and more unpredictable as flights are cancelled or limited, and the threat of border closures could complicate extending visas for some foreign workers. A graver consequence of closed borders would be for those seeking emergency medical treatment. “The country’s medical care is not sufficient for critical care,” Derek admits. “[Closed borders] would leave any of those in emergencies or needing medical assistance for other serious illnesses without quality treatment options.”

There is a lot of uncertainty everywhere in the world right now — but there are also many opportunities to share God’s love in practical ways. If the coronavirus crisis drags on for a few more weeks or even months, the effects will be damaging for many countries, but especially those that are already economically struggling. “We want to be good employers and take responsibility for caring for our staff in a crisis and to continue to be able to pay their salaries, even if our businesses have to close for some time,” Derek shares. “We need some help to be able to care for our people and others in our community.” 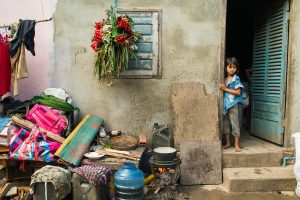