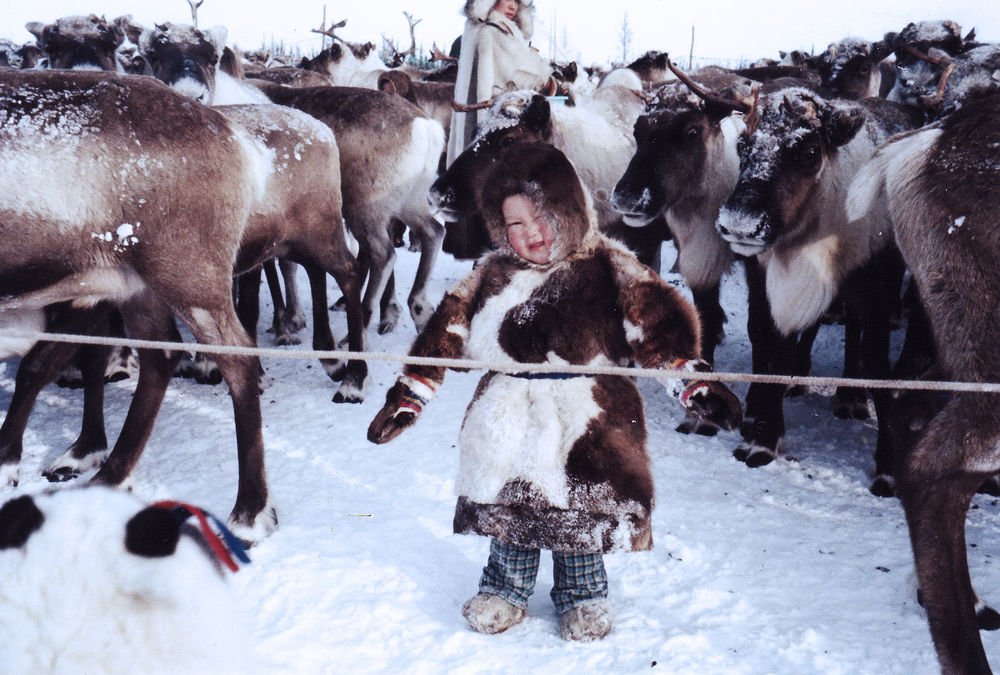 “I will also make you a light for the Gentiles, that you may bring my salvation to the ends of the earth.” – Isaiah 49:6b (NIV)

Field worker ES moved to Arctic Russia with the dream to share the gospel by translating the Bible for the Nenets people. The Nenets are indigenous reindeer herders living in Northern Siberia, including the Yamal Peninsula. Yamal means 'the end of the earth'. Out on the tundra, locals travel by snowmobile or reindeer sled. To reach particularly remote villages, it takes two to four hours by helicopter from Salekhard, the main city in the Yamalo-Nenets Autonomous Okrug.

The Yamal Peninsula is home to more reindeer than people, and winter lasts nine months. “It’s very cold; minus 40°C can be pleasant for a walk if there is no wind,” joked ES, an OM EAST partner. ES previously worked on an OM team. It was during this time that her vision for Nenets Bible translation began. In 1992, an OM colleague challenged her to pray for the Nenets. She received a book on minority groups, which offered just a few lines of information about them. Eight years later, ES relocated to Northern Siberia where she has invested 18 years of her life bringing the gospel to 'the end of the earth'.

The minority group has a population of around 45,000 people. Half of them live in Russian-speaking villages, while the other half are nomadic reindeer herders who live on tundra and speak the Nenets language.

“Nenets is the heart language of the reindeer herders. It’s much easier for them to understand,” ES said. “Translation is a complicated process because there is a great gap between two totally different cultures.” ES found it straightforward to learn Nenets since the word order is similar to her own native language.

When local woman N read a passage in Nenets, she discovered she had misunderstood the same Scripture in Russian. “This is why we need the Bible in our own language!” N expressed. Four books of the New Testament are in print, while others in progress. Two illustrated Bible storybooks have been designed and published by OM EAST.

A book of light or a lighter load?

“I moved to Arctic Russia during December, the darkest month,” ES recalled. “One day when I was testing translations, the electricity suddenly cut out. We sat without light all day. It was dark! Then I understood the meaning of light.”

For ES, this experience of the Arctic winter darkness is a picture of life without Jesus Christ. She desires that the Nenets would know Jesus as the light of the world. It is Jesus who frees people from sin and gives them the light of life if they ask Him for forgiveness and choose to follow Him. “I want every Nenets child to have a Bible,” said OM EAST’s partner, who has distributed thousands of Bible storybooks over many years. ES has observed children taking more interest in the Bible storybooks than the chocolate she offered.

A nomadic lifestyle makes it difficult for the reindeer herders to carry a collection of Christian literature. “They don’t have extra things—just the minimum is enough,” ES explained. “They have one pot, one kettle, and they don’t need a freezer!” However, they do have mobile phones. Her solution is to develop publications into applications so they can be stored on mobile phones, also allowing individuals to listen to the text. OM EAST plans to help provide these resources digitally. “Apps are able to help bring salvation to the Nenets!” said ES.

Faith seen or faith to see?

ES met N 16 years ago at a church in the town of Salekhard. Later, N invited her to visit two family members on the tundra. ES tested a translation by reading some Scripture verses to their hosts. They reacted by walking out, leaving her alone in the tent. Jesus’ teaching had touched a nerve. “N came in, angry, asking me what I had told them,” ES remembered. “But N showed me pity because my face was black and swollen with frostbite. She let me read another passage to her, which described how to be born again into a new life of following Jesus and gave the example of selling everything and giving to the poor. This made her more angry!” However, when they next saw each other, N had changed, and she had decided to be baptised and wanted to give ES a tithe to print the Gospel of Mark. Since then, ES recovered from frostbite and, over the past decade, N has sometimes joined ES and another woman early in the morning to pray.

“Not many are excited about the Bible,” said ES, crying as she spoke. “I’m looking for revival!” There are around 200 known Nenets believers, representing a small percentage of the population. The indigenous people group believe in numerous gods. For many, the reindeer are their life, their source of food, clothes, transport and shelter. ES longs for the Nenets to acknowledge their Creator as their true provider and life-giver.

“A few have faith, and I see some who want to read the Bible. Through them I have hope,” reflected ES. “There is hope that they will know Jesus. I see beyond reality. We need to be patient, keep serving and not give up.”

Give praise to God who is light. Give thanks that He speaks through His Word. Please pray Nenets will put their trust in Jesus and receive His salvation. Please pray for wisdom as ES helps make God’s truth available. Please pray that believers grow strong in their faith.

Scripture reference: “When Jesus spoke again to the people, He said, ‘I am the light of the world. Whoever follows me will never walk in darkness, but will have the light of life.’” – John 8:12 (NIV)

OM EAST’s literature and media ministry produces high quality print and digital media in over 25 languages. Always working with partners, they seek to share the gospel, strengthen churches and bring hope to people groups throughout Eurasia.

Your part in this will be to ensure this alliance of artists is provided with a clear, consistent structure in which to thrive.
Full Details
Administrative Assistant International    Go & Live    As soon as possibleBe part of a global team bringing the beauty and truth of Jesus to the least reached through the arts and artists.  Using your gifts and skills you will provide administrative support and assistance to the Director and Associate Directors.
Full Details
Graphic design / Illustration or Motion Graphics International    Go & Live    January 2023Do you have skills in graphic design, animation, user interface layout or illustrations? Use your creativity and skills to help share God’s love with least reached people groups through high-quality print and digital media in different languages.
Full Details
Incarnate Manager – Inspiro Arts Alliance International    Go & Live    As soon as possibleDo you love to organize complex events? Can you imagine touching every corner of the globe with beauty by helping equip artists to serve cross-culturally?

We’ve got the program and connections. We need a manager to make it work smoothly and efficiently. Could that be you?
Full Details
Financial Development Director International    Go & Live    As soon as possibleDo you have a heart for fundraising for God’s Kingdom?  Fundraising is critical to ensure that our ministries are well resourced and our personnel fulfil their roles to their best capacity. We are a catalyst for seeing vibrant communities of Jesus followers among the least reached and we need someone to oversee our financial development strategy, manage staff and coordinate with our partners.  Join us and use your gifting in financial development as a ministry in our context of integral mission.
Full Details
Fundraiser International    Go & Live    January 2023Do you have a heart for fundraising for God’s Kingdom? MediaWorks is looking for a Fundraiser to ensure we have the resources needed to run media ministry. As you support our work on Media Strategy, Creation and Distribution, you are making it possible to produce media that share God’s love with the least reached in their heart languages.
Full Details
All Service Opportunities
All Visit Opportunities