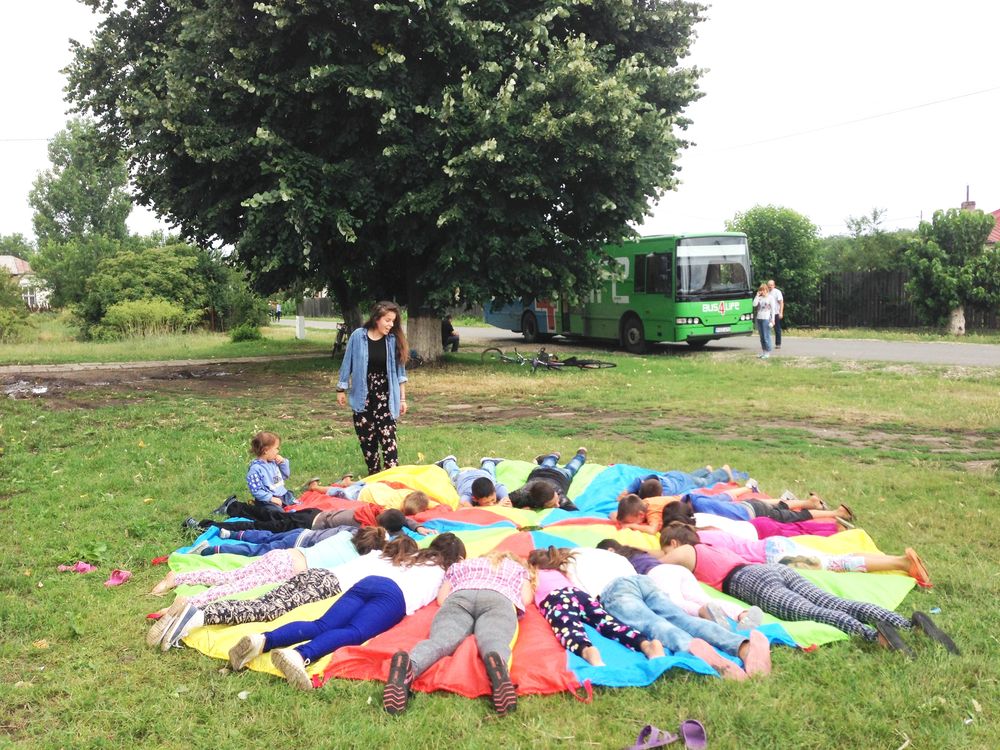 OM’s Bus4Life visited Romania twice during the summer of 2018. In one town, 120 children came to school in the middle of the summer holidays to take part in Bus4Life’s activities. A young volunteer pondered the cost of following Jesus.

Let’s not go home yet

In late June, Bus4Life was warmly welcomed to the county of Buzău, where it took part in school outreaches organised together with Child Evangelism Fellowship (CEF). Several workshops were put on for the children, including arts and crafts, sports and watching Christian cartoons inside the bus. In one of the villages, about 120 children came to the school and the films had to be shown outside – there was simply not enough room inside.

“It started raining in the middle of the movie, but the kids insisted on watching the rest, and sat under umbrellas with their parents and teachers, until it was late and very dark outside,” Raluca says. “The school principal told us it had never happened before in the history of the school that children didn’t want to go home! And it was their summer holiday, they didn’t even have to be there!”

Out of the church

The first week of July the Bus4Life team travelled south, and organised an outreach with a small church of about 20 people. It was the first time the church had ever organised a public event for their city. The event was a big success. The local newspaper wrote articles about the bus every day the team was there.

Feedback from the church was also encouraging: “Bus4Life is such a great tool! People are curious about the colourful bus, and it is so easy to start conversations with them. We could see how they started to respect the church more, because they saw the quality programme we offered to the community. For us, too, it was nice to be able to offer such a wide range of activities: from medical tests to kids' programmes and lots of books – even a conversation with international people!”

At the end of July, Bus4Life returned to Romania for another twelve days, this time to the Constanta area near the Black Sea. In the mornings, the team invited people onboard to have their blood pressure and blood sugar tested. Some had never had their blood pressure checked. OMer Delia said, “It is quite common in this area for people to live all their life without ever visiting the doctor’s office. Some of the older people are afraid of the doctor, fearing they will be diagnosed with some awful disease.”

The team offered to pray with everyone who had their blood pressure measured. While some said “no”, others enthusiastically accepted. Upon finding out that Bus4Life is a Christian ministry, one Orthodox man exclaimed, “This is why you know so much about God!”

Formal confession and praying to Holy Mary play significant parts in the Orthodox faith. “I tried to encourage him to pray directly to God”, Delia said. “I said to him, ‘You don’t have to wait until Sunday to confess your sins, you can ask for God’s forgiveness any day.’”

Vasile* is a 12 or 13-year-old boy who came to the bus in one of the villages. He didn’t know how to count or read, and it seemed even difficult for him to understand every spoken word. Delia learnt from other children that Vasile was a boy ‘without parents’, and that he and his little brother were being raised by their grandmother.

Vasile came to the bus early in the morning, and spent the two days with the team from the morning until the evening. “We shared our lunch with him, and gave him water to wash himself, as his skin was quite stained,” Delia reported. The boy grew close to the team over the two days, and in the end hugged everyone, begging for more and more hugs.

Thankfully, the local church knows Vasile, and has been helping his family, providing them with food and other supplies. Unfortunately, there are many children like him in Romania.

15-year-old Alex* was one of the local teenagers who volunteered with the bus during the outreach. Alex goes to church with his family and believes in God, but has yet to make up his mind about actively following Him. Encouraged to ask anything that’s on his mind about God and Christianity, Alex asked Delia: “Is it ok to paint your nails?”

Romanian Christians are often very modest with their appearance, and girls are usually not allowed to wear make-up or jewellery. For a young teenager, the decision to follow Jesus has everything to do with culture. 'What is the price that I have to pay for this?' 'What is right and wrong?' Alex ended up having a good conversation with the team about culture and sin, and how to navigate between the two worlds that seem so far from one another.

Known as OM’s 'ship on wheels', Bus4Life is a multi-functional missions centre that serves the communities of Central and Eastern Europe. Bus4Life is currently looking for a driver for the year 2019.