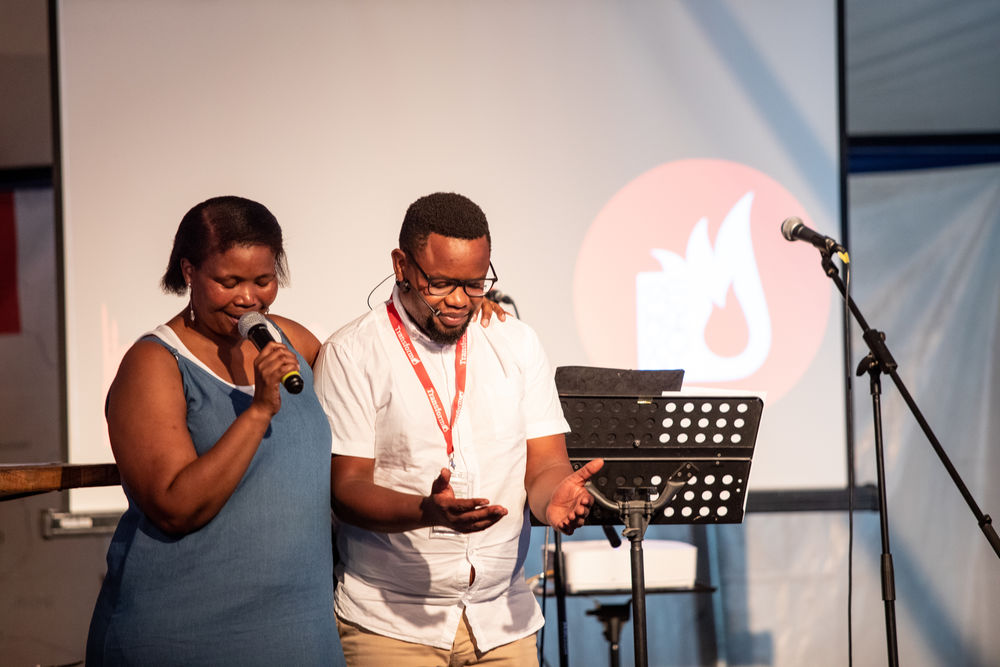 “My earthly father was right,” says Esther Banzi (South Africa). “He believed that everybody serves God in their own way. It was just that nobody believed I could actually do it–me included!” But her Heavenly Father was out to prove everyone wrong.

Esther was taught about Christ from an early age, growing up as a pastor’s daughter in South Africa. However, at the age of 21 her life seemed to be falling apart. Dealing with personal issues and rejection, both at home and among her university friends, became more than she could bear. She had made plans of ending it all, when she heard God’s voice, asking: “Do you really want to live like this? Or kill yourself?” Something stopped her, and she prayed: “If this was really you God, please help me talk to my parents.”

The next Sunday, when the altar call was given at church, Esther gave her life to the Lord. Nobody believed she was serious. However, Esther was now ready to trust God even if others did not believe in her. She explained: “I have always felt the need to prove myself. I’ve felt that nobody trusts me or believes in me until they see that I can actually do it.”

After accepting Christ, things remained largely the same. Being the rebellious child, her family still treated Esther as an embarrassment. She was not permitted to return to the university since it was now her sister’s turn to get a chance of higher education. Her father had started a small Bible school, and Esther joined the teaching, even though no one expected her to succeed there, either.

An older man from the UK visited the Bible school to share about missions, and a few days later three girls came to share about the OM Ships ministry. “It was an eye opener to me when the girls came from South Korea, Jordan and Namibia. I thought missions was for retired white people only,” said Esther.

When the message came that she had been accepted as a volunteer on the ship, berthed in Durban, South Africa, at the time, Esther was totally amazed; she had not even applied! On board she met a whole variety of people, some even younger than her, and said to herself: “I can do this!” Later she received a phone call inviting her to join the ship for a two-year programme. All she could do was to pray that God would make everything clear to her family.

In January 2003, Esther joined the six-month training programme with OM in South Africa, before moving on board the OM ship for two years. When her commitment finished, Esther arrived home with plans of returning to the ship, but fundraising was difficult. Nevertheless, ten months later, she was back on the ship for another two years. “I had no training in raising support,” said Esther, “and had never received any financial church support either. God was blessing me to live on what I had; it was never more than I needed, sometimes not much at all, yet I am still here, still in God’s ministry. God has been faithful. I would not be where I am today if it wasn’t for God and His grace upon my life.”

A trio of ministries

Esther currently divides her time between three ministries. She does administration for AIDSLink International, a ministry that OM partners with; she is organising workshops and emceeing meetings at Transform, an annual OM missions conference in Europe and she is leading the OM finance team in the Netherlands.

“I have always loved to serve and to work with people and AIDSLink gives me a very intentional purpose. It has taught me more about standing in the gap for all those people infected and affected by HIV and AIDS, and I love the vision about seeing hope restored and together overcoming the challenges of HIV and AIDS,” she shared. “I know God has called me to be part of this amazing ministry that brings change and hope to the lives of those who have no hope and no voice. It includes challenging assumptions, calling others to get involved and working for change.”

Esther is also on the Transform leadership team. “I started as a participant in 2012, and never stopped!” said Esther, laughing. “While I enjoy organising workshops and main sessions, singing and emceeing meetings, what really inspires me is seeing people, even from South Africa, leaving their communities and country for the very first time to go on a mission trip—to join the Transform conference and move from there into full-time long-term workers in missions.”

When Esther returned from her four years on the ship, she worked for several years in the OM finance department in South Africa. Recently, OM in the Netherlands asked if she would be willing to lead their finance team and move from South Africa to the Netherlands. Always ready for a challenge, Esther accepted. As for many missionaries overseas, visa applications can be a slow process, and Esther’s has been no exception. However, with today’s technology, she can do a lot of the work remotely from South Africa, yet she is hoping she will soon be able to make the move. Her plan is to be based long term in the Netherlands while continuing all three roles—with AIDSLink International, Transform and the finance team.

She was a girl whom nobody believed would amount to much. God not only turned Esther’s life around, but showed her how to fight for those who can’t help themselves, mobilise people for missions, emcee meetings and lead a finance team. She was a pastor’s daughter who believed she had nothing to live for, but now lives to share God’s love with others.

If you enjoy seeing helping people to be placed in their strategic place of involvement and if you are a recruiter or have some experience in recruiting and you are looking to use your gifting in ministry in South Africa, read more below.
Full Details
Missions Mobiliser South Africa    Go & Live    As soon as possibleThe mobilising role exists to mobilise Jesus followers to live and work among the least reached in an authentic manner. We do this by inspiring, connecting & equipping these Jesus-followers to and for God's mission.
Full Details
Diaspora Hope –  the Least Reached South Africa    Go & Live    As soon as possibleCape Town is home to thousands of people of other faiths who have migrated from some of the hardest-to-reach nations in Africa, along with a local community of South Africans who have never embraced the gospel. The OM ministry team in Cape Town works to impact these unreached people right on our doorstep with the love of Jesus. We hope to see vibrant communities of Jesus followers established in these neighbourhoods. Come and join us.
Full Details
Tshega Mission South Africa    Go & Visit    1 April 2023 - 29 June 2023Reaching people of the local community.
Full Details
All Service Opportunities
All Visit Opportunities