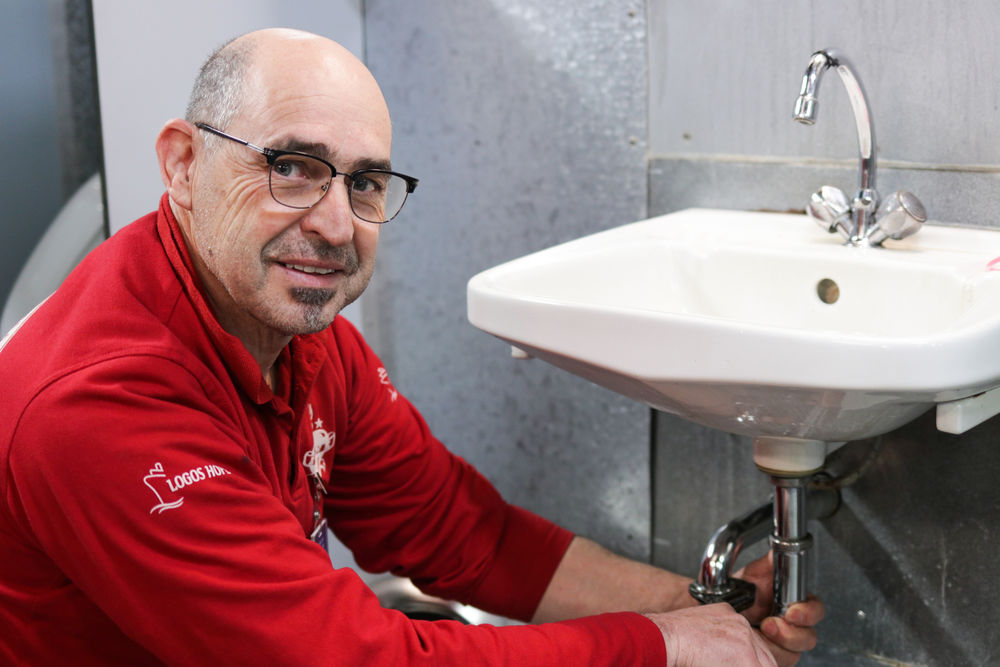 Carlos Alarcon, from Argentina, has joined Operation Mobilisation’s Ship Ministry not once, but twice. As a 27-year-old he served on Logos II for three years. After a 25-year gap he joined the successor ship, Logos Hope, as the onboard plumber.

Carlos came to know God at the age of 17. “I was raised Catholic,” he says, “and I thought church was only for old people, because I always saw old people there. Then one day, my mom became a Christian and invited me to church. I told her, 'Because you are my mom, I will go with you this Sunday.’”

“That day,” Carlos continues, “The pastor was talking about Paul, when he was Saul, and how he persecuted the church. Jesus asked him, ‘Saul, Saul, why are you persecuting me?’ and I remembered how my friends and I had made fun of Pentecostal Christians who visited my town.

“I felt so guilty. It is incredible how God works in us. Sometimes it is in big things, but in that moment, it was a small picture: I was persecuting the church.”

Around the same time, Carlos’ older cousin came to faith in Christ and began taking him to church. “Some people become a Christian immediately, after a one-time experience,” Carlos says, “But for me, it was a process. It took three months for me to understand that Jesus is real.”

Then, in 1990, a crewmember from Logos II came to speak to Carlos’ class in Bible school.  “He was sharing about Africa,” Carlos recalls. “I was younger in my faith then, and was surprised when he named the kind of people who were needed in mission: doctors, nurses and carpenters.”

“I’m a plumber by trade, but we use a lot of the same tools as carpenters. I thought, ‘Well, I might not be able to build the perfect house, but I will be able to build a good house.’ Then I prayed, ‘God, I am not a missionary, but I can give you my hands.’”

“I prayed for three months, but eventually stopped,” Carlos says. “Then, about three months before the ship came to Argentina in 1990, something happened in my heart. I asked a friend in Bible school how I could get in contact with the man from the ship. I was told there was a man working at my Bible school who was part of Operation Mobilisation (OM). During this conversation, we were walking down the stairs—and this man was coming up!

“So I spoke with him, went through an interview and planned to have some training. But I hadn’t made the decision then. Deciding to join God in mission was a journey for me, just like coming to know the Lord had been.”

Three months later, Logos II arrived in Argentina. Carlos’ Bible school visited the ship, where they heard the director speak about mission work and invite people to commit to serving. “I stood up because I felt it,” Carlos explains, “But then I opened my eyes and realized that of the more than 80 people in the room, only three or four had stood up. I was embarrassed. ‘Wow, what did I just do?’ I wondered. I started to fight with God. ‘God, what did you do? You know I am a man without resources. Why did you embarrass me in front of people? Why didn’t you make those who have more resources stand up?’ I was crying.

Carlos served on board Logos II for three years; working in the bookstore, the engine room, and with volunteers. In 1995, he returned to Argentina to work as a plumber and serve as a pastor. Then, one day, he saw a post from OM in Argentina on Facebook, saying: “You can sail on Logos Hope as a plumber.”

“I replied to it and said, ‘I am a plumber,’” Carlos remembers. “The OM office contacted me and we began to talk. One day they sent me a message, asking, “Are you ready to serve on Logos Hope?”

Carlos laughs. “The funny thing is, when I first wrote to them, I wasn’t completely serious about rejoining the ship. I didn’t believe it was the time to go back. I knew one day I’d return to an OM ship because I love this ministry. I love to travel, and it would be special to share the gospel in all the Latin countries Logos Hope was visiting. But when I received that message, I was like, ‘I don’t know.’ I spoke with my family and my pastor and they confirmed it for me; so I rejoined the Ship Ministry in 2017, twenty-five years after I first joined Logos II. I was 52 years old.”

During his time on board, Carlos has seen God use his—and others’—professional skills for His glory in order to bring people to Him. “In Jamaica I was on a practical team, building a house for a woman whose leg had been amputated because of diabetes. Her original house was in bad shape. We took everything away and burned it, and a crewmember on the ship, who was a professional engineer, measured everything for a new house. We transported it back to her property and put it together. It even had a bathroom and a kitchen. She was so happy.

“No more than 20 meters from where we were working, a nearby house caught fire. There was a lot of wind and the flames were really high,” Carlos remembers.

“One of the crewmembers on my team was a professional firefighter, and he told us what to do. We cleared debris between the house we were working on and the fire and poured water all around it. We weren’t able to extinguish the fire, but it didn't spread.

“When the fire department came, they asked, ‘Whose idea was it to clear the land and pour the water? Good job! If you hadn’t done this, it would have burned all the houses.’

“When the people living there heard this, they gathered round and we began to share the gospel. God gave us a great opportunity. We gave out many Gospels of John, and people accepted Christ.”

Now at the end of his two-year term on board, Carlos has decided to extend his commitment for six more months. “I will train someone soon, because I need someone to replace me. But when I finish with the ship, I’m going to go home and share the gospel with all my friends who aren’t Christians,” he declares.

What if you said to God, “I give You my hands?” What gifts and skills has He given you to use as a professional in mission? Click here for more information on how and where you can serve Him: www.scatterglobal.com/.

Kate Toretti loves to tell stories about what God is doing in the world. She currently serves in communications for OM in Argentina.