Growing up in a Christian family, Stephan Schmidt knew who God was but struggled to experience God’s work in his own life. And so, he turned away from God.

Things changed in the Schmidt house; the biggest being that they started to pray together as a family. It was during this time that Stephan felt God telling him to move his family from Germany to somewhere in Africa. “Stephan and I decided to pray separately so that we could individually hear from God if we should go to Africa as a family,” Christiane said. The idea of moving her whole life and family to Africa was hard for Christine, but through prayer, it became easier every day.

In 2012 the family moved to South Africa to attend Missions Discipleship Training (MDT) in Pretoria. While they did MDT, they were introduced to Lesotho—a small country within the country of South Africa—where they did an outreach.

After MDT, the Schmidts stayed for six years in South Africa serving at the OM office in Pretoria. During this time, they were able to build new relationships and find a home church. They knew that God had called them to Africa, but were unsure where God was going to use them.

It started to become clear that they should move to Lesotho as a family and serve the Basotho people. They moved to a small village on the South African side of the border to start searching for a house as well as get involved in the daily ministry. Driving in and out of Lesotho was not only exhausting and expensive but meant that the family didn’t have as much time to start relationships and build trust with the local people as they wanted. It was evident that God had already started the work in the people’s hearts—the Lesotho people were ready to receive the good news of Jesus.

God answered their prayers and gave them a house to rent in Malefioane. Full of joy and hope, they went to view the place and found a small two-room house without any basic amenities. For a family of five, this seemed to be a huge challenge. There was no bathroom nor living room and the water would need to be fetched from a nearby river. How would they keep warm during the snowy winters in the mountains of Lesotho? Christiane was also concerned about their furniture; where would everything fit? But the view from the house was what Stephan noticed—the same view God had shown him in a dream. With peace in their hearts and trusting He would help make it all work, the Schmidts moved in.

Light in the darkness

Since the move, the Schmidts have experienced challenges. “Cultural challenges would be the least on my list,” Stephan said, explaining they have encountered major spiritual challenges—particularly witchcraft.

One day a lady came to their house and gave them a gift for their home. Then the whole family became sick. When they prayed for healing, God used a team member to ask them to remove the gift from the house and burn it, which they did. The next day, they were all healed in Jesus’ name. God has turned these kinds of challenges into opportunities for joy and to reveal His glory.

The Schmidt family enjoys sharing Christ’s love to the people of Malefioane not only with words and actions but also in their daily submission to God’s Word. Lesotho is ripe with opportunities to bring light into the spiritual darkness and show the love of God in many practical ways such as children programmes, short-term outreaches to minister to remote areas and Question and Answer sessions about the word of God. Schmidt’s main focus is to make disciples who will make disciples.

The Schmidt’s try to help by giving their time, finances and an ear to listen. They live with the people; fetching water and cooking on the fire just like the locals and have adapted to the culture.

Often the family is asked: “how are you surviving?” “It becomes very difficult to answer that question because the life we have now is way better than before,” said Christiane.

The Schmidts do not know how to explain it to people back home in Germany; the experiences on this journey with God to—and in—Lesotho have been far more valuable to them than all the comforts of the world. Living in Lesotho has also made them realise that they don’t need more ‘stuff.' To follow God wholeheartedly has become an adventure that the Schmidt family would not want to miss out on. 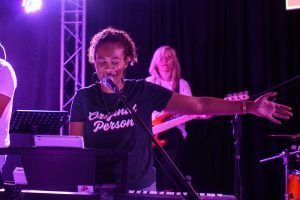 Other Resources by Deborah Ngobeni

Africa Trek 1 South Africa    Go & Visit    3 September 2022 - 5 December 2022to provide a short -term mission experience within a cross-cultural setup. we would like to inspire, equip and disciple participants through providing diverse practical ministry experience.
Full Details
AIDS Hope – Meetse a Bophelo Centre South Africa    Go & Visit    1 September 2022 - 29 November 2022To bring hope to people affected and infected with HIV & AIDS.
Full Details
Missions Discipleship Training Plus (MDT+) South Africa South Africa    Go & Visit    Start: As soon as possibleDo you have a desire to grow and be challenged to put your faith into action? Come and join us! With people from all over the world, you will be discipled to find your place of strategic involvement in seeing Vibrant Communities of Jesus Followers among the Least Reached. During Phase 1 we will help you to develop a Personalised Preparation Plan, based on what you have discovered about your place of strategic involvement. Phase 2 is a continuation of your journey in holistic missions.
Full Details
Area Finance Development Team Member – Africa Area South Africa    Go & Live    As soon as possibleWe are looking for someone to join the OM Africa Financial Development team.  Do you have the skills to be a catalyst for generosity to see that happen? You will be a key part of the work. We are looking for someone who has the character to be self-motivated, trustworthy and who has a keen eye for opportunities. Your work will cover a number of fields across Africa as well as a wide-range of topics, from donor relations, compliance to business and cross-cultural teams.
Full Details
Africa Area IT Team Member South Africa    Go & Live    As soon as possibleAfrica is awakening. Opportunities are plentiful, but specialised/skilled personnel are few.

Here’s an IT challenge – oversee a multinational, multi-lingual team in the area of IT. Bring your resourcefulness, flexibility and IT know-how, and experience a rich and totally unique culture as you share life and faith with the Africans.
Full Details
Team Members South Africa    Go & Live    As soon as possibleSince our beginnings, we have been driven by a deep conviction that everyone should have the opportunity to hear the gospel at least once. Sadly, there are still thousands of peoples and communities that have never heard about Jesus, ever. Do you share our passion for these people to hear of His fame and renown? Come. Join one of our teams and be amazed at how God is working in lives and communities around the world, and be amazed at how He works in your life, as well. We are looking for you, and many more like you, to join us on this journey to see vibrant communities of Jesus followers established among the least reached all over the world.
Full Details
Administrator South Africa    Go & Live    As soon as possibleAcross OM, we have a strong need for individuals gifted in administration to aid ministry taking place on the mission field. Those with administrative skills are needed in almost every facet of ministry to ensure that outreaches, meetings and programmes operate with efficiency, and that tasks, paperwork and coordination involved in organising people and events is accomplished with completeness and attention to detail. If this describes how God has wired you, consider here how you can use your administrative gifts to see more vibrant communities of Jesus followers established among the least reached.
Full Details
REACH South Africa – Team 2 South Africa    Go & Visit    6 August 2022 - 30 June 2023Do you have a desire to grow in your faith? Do you want to be trained in practical ministry skills and want to be challenged to put your faith into action? Come and join our Reach programme! Together with other people from all over the world, you will be trained, discipled, guided to find your place of strategic involvement in seeing Vibrant Communities of Jesus Followers among the Least Reached.
Full Details
Children’s Ministry Intern South Africa    Go & Live    As soon as possibleDo you have a passion to serve children in full time missions?  Would you like to go to an area where people have not heard the gospel yet, but do you feel unprepared and unequipped?  Then this opportunity is for you.
Full Details
Tshega Mission South Africa    Go & Visit    1 September 2022 - 30 November 2022Reaching people of the local community.
Full Details
Children’s Ministry Training Coordinator South Africa    Go & Live    As soon as possibleAbout 50% of the population in Africa is under the age of 15.  If we want to see vibrant communities of Jesus followers, we will need to include children in our strategy.
As children’s ministry team of Africa Area, we
help fields to align with the vision while including children. We also equip and resource the ministries so that they can do their ministry more effectively.
Full Details
Missions Mobiliser South Africa    Go & Live    As soon as possibleThe mobilising role exists to mobilise Jesus followers to live and work among the least reached in an authentic manner. We do this by inspiring, connecting & equipping these Jesus-followers to and for God's mission.
Full Details
All Service Opportunities
All Visit Opportunities