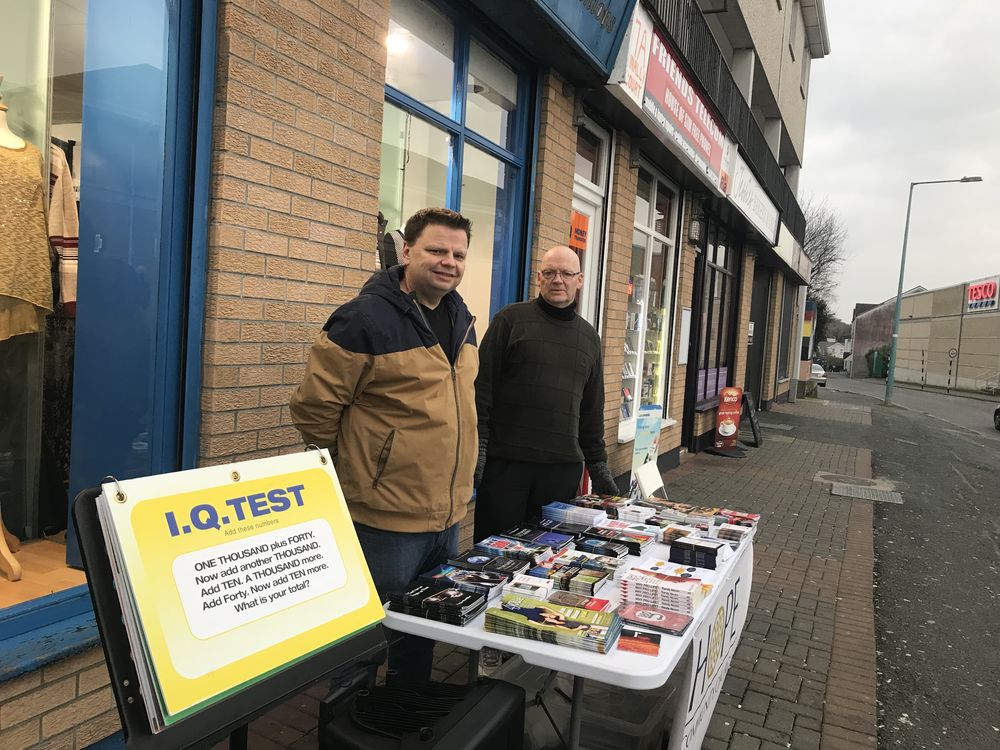 Ludie Creech, his wife Barbara and their family moved to Ireland from the USA in December 2008. Since that time, Ludie has transitioned through multiple roles within OM Ireland. After developing the Philippian Project–a programme for long-term couples and families to serve with a local church–Ludie switched from promoting the ministry to becoming part of it. But rather than joining a pre-established church, Ludie, along with others, planted a new church in a new town with the hope of seeing God’s kingdom expanded.

The religious statistics in Ireland give a clear picture of the need for the gospel. “There are numerous town with populations of over 5,000 that do not have a gospel-centred church,” Ludie shared. “I had a couple days in my work week to focus on church ministry, and after a while, I started to think that this idea of church planting had a nice ring to it.”

Ludie and Barbara’s church, Grace Community Church, had been reaching out to Longford for nearly ten years. Two families from the church were already living there and agreed to be part of a new church plant if it came to be. “We wanted to plant this church as part of a team and God graciously put people around us who said, ‘We’ll go with you,’” Ludie said. “We’re not just sitting there by ourselves trying to figure it out. There’s history, intelligence and support to build on.”

As they wanted to be intentional about reaching the community, Ludie and his co-planter Tim Coyle spent time going door-to-door, setting up a literature table on the sidewalk in town, offering movie nights and holding community discussions about ‘Big [Life] Questions People Ask.’

“It’s not just sitting back and preaching on Sundays,” Ludie said. “But really reaching into the community with the gospel.”

Longford boasts a population of roughly 27,500 people within a 12km radius from the town centre. Ludie shared how they decided to “boldly ask God for one per cent of the population to come to Christ through the proclamation of the gospel. That’s 275 people in the next year or two. It sounds crazy and huge, but we believe that God saves people and He does it through the preaching of His word. …We don’t want to just see people [come to salvation in Christ]. We want to see them discipled and embracing Christian living in every area of their life. It won’t be an overnight thing, so it requires investment into people.”

In addition to their Sunday morning service, Ludie’s family and their team are finding ways to be involved in the community. As they see it, being good neighbours and citizens is all part of the platform to share the gospel. A team from Ludie’s church in the USA travelled to Ireland and helped clean about six miles of highway. Such community service helped establish relationships as well as their own identity as a church group.

“As God gives you the opportunity, preaching the gospel to them, whether that’s over coffee, on the street corner, at the literature table, in a church service … we’ve got one message to bring to people: only God can save. All we’re told to do is preach the gospel and trust God to bring about the increase from that.”

The name Hope Community Church holds deep truths for its members and the community. Ludie defined the different parts of the name as follows:

Hope: “We’re living in a land where everything folks placed their hope in (people, relationships, finance, health, even the church) has let them down and will let them down. We want people to know that there is hope in Jesus. No one is beyond hope.”

Community: “We’re a people of community. We love coming together because we’re created by a God who’s been in community for all eternity. We want to create that place for people to come together.”

Church: “The church [the people] is the highest form of community. We don’t have to get crazy ideas about fulfilling the Great Commission because He’s already given it to us: the local church where people can live in the light of the Gospel.”

Immersion Student Ireland    Go & Live    September 2023The immersion training programme is designed to immerse you in God’s Word, in ministry and in cross-cultural missions, in order to challenge you in ways you could never imagine, and drive you to depend on God more and more each day. Will you join us?
Full Details
Missions Mobiliser Ireland    Go & Live    As soon as possibleAre you enthusiastic about short and long term missions? Is your heart's desire to see more serving internationally? We are looking for someone who enjoys opportunities to share about God’s Kingdom work and excites others to get involved. If you are a recruiter looking to use your gifting in ministry in Ireland please read more!
Full Details
Impact Ireland 2023 Ireland    Go & Visit    12 July 2023 - 25 July 2023Impact Ireland is all about sharing the Gospel with people who do not know Jesus, confident that the Gospel will make an impact in their lives. We want to: - introduce Irish people to Jesus by sharing the Gospel message widely and creatively - inspire Irish believers to live for Christ - encourage and support Irish churches in evangelism - help participants grow in their love for God and their confidence in sharing the Gospel
Full Details
Immersion leader Ireland    Go & Live    As soon as possibleDo you have a passion for seeing young adults grow in their knowledge of God and zeal for His mission? We would love people to join the leadership team for Immersion, could this be the right place for you?
Full Details
Vehicle Fleet Coordinator/Mechanic Ireland    Go & Live    As soon as possibleWill you be the Vehicle Fleet Coordinator/Mechanic to look after our fleet of 20 plus vehicles? You will be responsible for the regular maintenance of the fleet as well as any associated paper work (such as insurances, and scheduling repairs). If you have mechanic experience, have practical and organizational skills, and pleasant and effective people skills, we would love for you to be part of our team.
All OM staff secure their own funding by private donations.
Full Details
Children, Youth and Evangelism team leader Ireland    Go & Live    As soon as possibleSince our beginnings, we have been driven by a deep conviction that everyone should have the opportunity to hear the gospel at least once. Sadly, there are still thousands of peoples and communities that have never heard about Jesus, ever. Do you have a heart for (young) people and a desire for them to hear of His fame and renown? Come and be involved in leading many different activities including kids clubs, Big Red Bus ministry, creative evangelism and much more!
Full Details
IT Administrator Ireland    Go & Live    As soon as possibleAs our IT Administrator you’ll be assisting the IT Coordinator in a multifaceted range of responsibilities. You will be managing the email network, provide MS Office help desk and other user support, provide network maintenance and support to a multinational team and system administration with Linux-server, Windows 7 and  10.
Full Details
Communications and Marketing Worker Ireland    Go & Live    As soon as possibleShare the story of what God is doing in Ireland and the world and effectively implement our strategies to do this well within our context. Use your own creative skills, and build relationships with others, as you help to create a clear and inspiring online and offline presence. Use your gifts and talents to inspire and encourage people to become involved in God's work!
Full Details
Partnership Director Ireland    Go & Live    As soon as possibleAre you great at building relationships and linking the right people to each other? Do you have vision to see Christians work together to build God's kingdom? Come and help us build partnerships with churches, organisations and trusts, so together we can work on seeing vibrant communities of Jesus followers here in Ireland!
Full Details
Finance Manager Ireland    Go & Live    As soon as possibleUse your financial management skills toward the purpose of seeing vibrant communities of Jesus followers established among the least reached. This important role is vital to ministry on the field. You would provide accountability for the cash transactions conducted on the field and perform duties to assist with accounting functions pertaining to bank accounts, budgets, journal entries, financial reporting and administrative changes, guided by precedent and guidelines of established policies.
Full Details
St Patrick's Challenge 2023 Ireland    Go & Visit    13 March 2023 - 21 March 2023Our St Patrick's Challenge is all about sharing the Gospel with people who do not have a personal relationship with Jesus, with confidence that the Gospel will make an impact on their lives.
Full Details
Internships in Ireland Ireland    Go & Live    AnytimeAre you looking for an opportunity to explore your gifting and passions? Or are you a student who wants to practice their vocation in a cross-cultural setting? OM is mobilising young Jesus followers to join our international team and serve and experience ministry in Ireland. We are open to have interns come from 2 weeks to 6 months, or even up to a year! Dates are flexible, although there might be more opportunities to help in other ministries during the spring/summer.
Full Details
All Service Opportunities
All Visit Opportunities