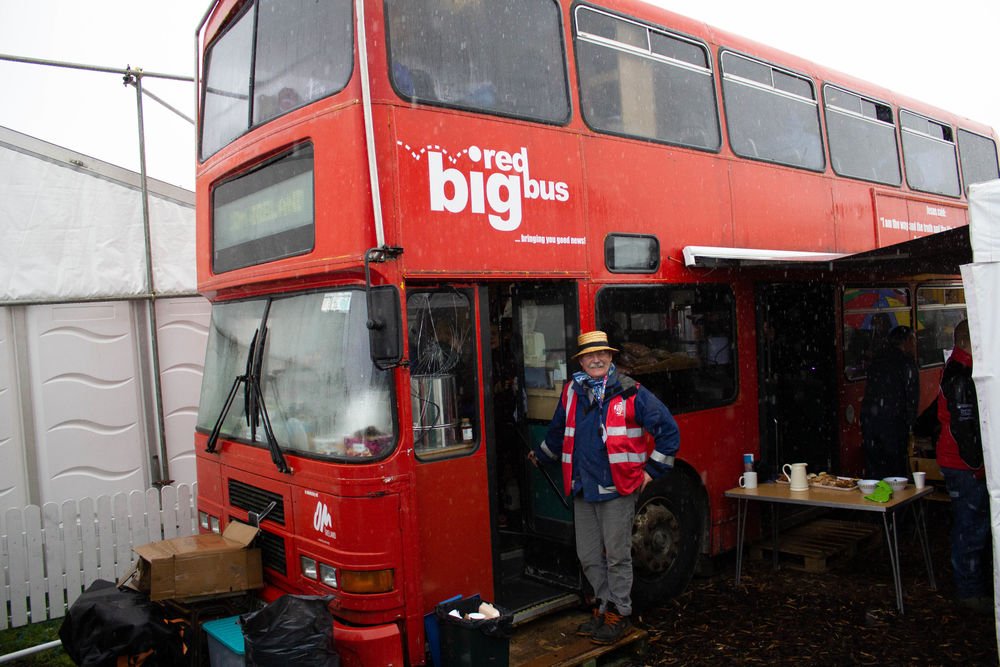 After years of the OM team dreaming and hoping for a way in, the Big Red Bus was finally ushered into the 2018 National Ploughing Championships on a windstorm. A landmark and icon for the ministry of OM in Ireland, the Bus is a mobile venue for a kids club, a tea/coffee bar or an outreach programme. Ireland’s largest agricultural trade show, the National Ploughing Championships includes three days of activities that bring nearly 90,000 visitors and an opportunity to witness like no other. OM Ireland has been partnering with Cavan Christian Bookshop (the Irish Evangelistic Band) for a number of years.

“The goal is to share the Gospel with as many people as possible,” said John Humphries (IEB), another OM partner for the Ploughing. “[We do this] through talking to people at the tables, free literature, talking to some as they walk past, and the team [engaging with others] outside the tent.”

Colm Ó Brolcháin, OM Ireland’s bus driver, explained, “Cavan Christian Bookshop is well-known at the Ploughing Championships for providing free tea, coffee, biscuits and cakes in a marquee. After a couple years, I started suggesting that the Big Red Bus would be a great additional venue because it has a kitchen with kettles, boilers, and coffee makers. But bringing the Bus would require renting another half tent space, which was not available in the budget. We still went to the Ploughing, still gave out tea/coffee, still talked to people, still spread the Word.”

Cavan Christian Bookshop had been providing the marquee for nine years. The tent provided a place for visitors to get out of the weather, sit, and enjoy a cup of tea/coffee.

“When we set up this year, the folks from Cavan were saying that we wouldn’t be able to use the tent in 2019,” Colm remembered. “It had done a lot; it had served its purpose.”

That was the preamble to the storm that would change everything. On Tuesday night, a massive windstorm ripped through the Midlands and made it too dangerous for the Ploughing Championships to continue the following day. The Wednesday morning events were postponed until further notice and not even the vendors were allowed onsite.

“When we finally arrived around 15:00, we discovered the damage to the tent, which was fragile anyway,” Colm said. “There was a lot of discussion about where to get another tent.”

“We had to find a way to continue or close up,” John explained.

At one point, when the conversation had stalled, Colm told John that the Big Red Bus was sitting at Lacken House, OM's base in County Roscommon.

John jumped on the possibility: “Who do I need to contact? How long would it take to get the Bus down here?”

After a couple of phone calls, Colm went to fetch the Bus. When he returned, a few logistics still had to be sorted.

“Their big concern was whether the bus would sink into the soft ground,” Colm shared. “I’d already anticipated that. I had planks that we’ve previously used to get vans out of soft ground, and we put the Bus on those.

“Then the question was would we have the Bus facing in or out? Because the tea/coffee was at the back of the tent, we had the Bus facing in. The blessing in that was that the Scripture verse (John 14:6) on the back of the Bus was absolutely obvious to everybody. There were people who came, read that and walked on. We just don’t know what that’ll do.

“Double decker buses are a novelty in the Irish countryside, so people are interested in that. We were still the Cavan Christian Bookshop, but part of that was the Big Red Bus.”

John also recognised the benefit of having the Bus on site. “When people saw it, they had to come and have a look. It was a great landmark to send people to as they talked to our team.”

The Ploughing Championships draws visitors of all ages. The organisers of the Cavan Bookshop tent are always looking for ways to appeal to everyone. Andrew, leader of the IEB, saw the difference having the Bus made, compared to years past.

“The Bus was a life saver this year [when our marquee was destroyed]. It has its own approach to evangelism, mainly to youth, and we saw that effectively fulfilled. We had a large number of young people in attendance, and the Bus has its functions and attractions for them.”

“The young people wanted to sit upstairs on the Bus and chill out,” Colm recalled. “For two days—the Thursday and Friday—there were a lot of youngsters on the Bus sitting upstairs and talking about issues of faith and why we’re doing this. That was very exciting.”

“One girl asked a lot of questions and shared some really personal stuff,” Sage, one of OM Ireland’s Immersion students, said afterwards.

“There were these girls who were fascinated by the free literature, so they kept coming back to look. We sat down and talked about anything and everything. They asked questions, and I answered. I’d expected more resistance but really didn’t get much.” Charis, another Immersion student, shared.

Colm hopes that this is the beginning of the Bus ministry serving alongside the IEB at the Ploughing Championships. “We were excited about the response to the Bus, and we look forward to working with these groups again in the future.”

The Ploughing Championships is just one event at which the Big Red Bus can be used.

“The Big Red Bus is one of those resources that needs to be used, and I’d love to use it more,” Colm shared. “The more we get to use it in different locations, facilities, places and outdoor events (like the Ploughing), the more opportunities we get to share the gospel. That is what we use the Bus for: proclaiming the good news of Jesus Christ.”