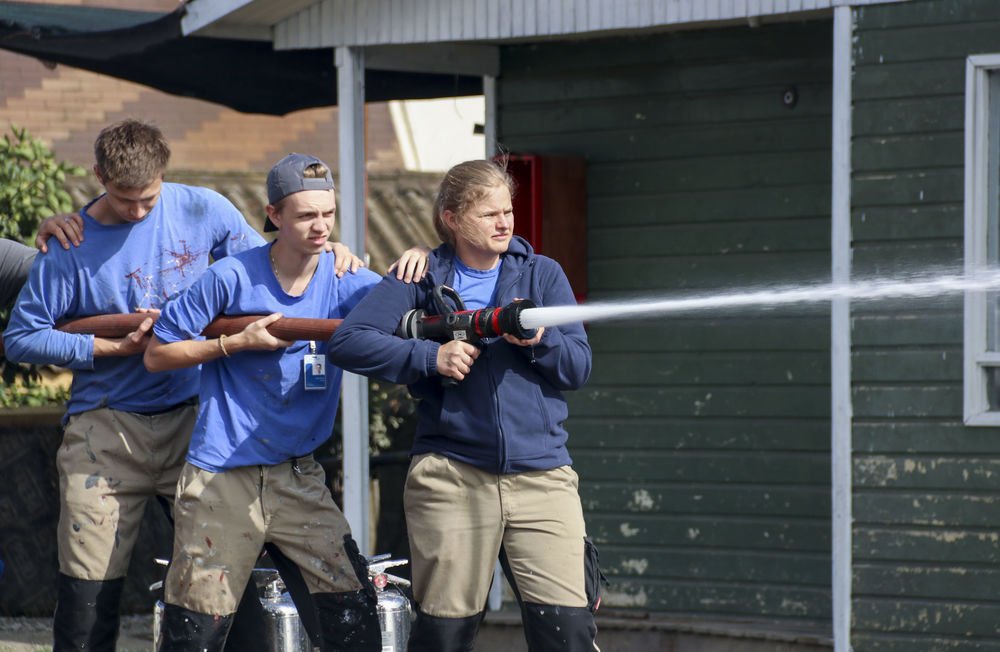 As a group of new crewmembers joined Logos Hope, those who were assigned roles in marine operations – the deck and engine departments – were put through fire familiarisation training. The course is mandatory for crewmembers joining the department.

Fires are not to be started on board the vessel, so the marine operations find other ways to provide suitable training outside. Lirquén's fire department was willing to help the new crewmembers receive the appropriate training. They learnt to work as a team to attack a fire, they reviewed their breathing apparatus, extinguished oil-based fires using a portable extinguisher and had a demonstration of foam firefighting.

Captain Tom Dyer (USA), who was supervising the training, noted that the new members of his department were attentive and also bonded with the local firefighters. “We take our training very seriously. Even after a training programme is completed, we look for additional opportunities to practice,” said Captain Tom.

Gabriela* (Mexico) explained that the training gave her confidence for her new role. “Whatever we do is to glorify God; for example, by taking care of His people,” she said, adding, “It is hard to remember everything and learn new words but this is the foundation for a good start.”

“When we finished the training, we thanked the captain and firefighters,” Captain Tom said. “I made the point that they are rescuing people and that our ministry is seeking to rescue people on a spiritual level: God is seeking to rescue us from sin and to give us hope for the future.”

The Chilean firefighters, who are all volunteers, had provided the water used for the training. When the ship's officers offered to help pay for it, the fire officer said he would rather the money went to a place where water is needed. To return the kindness, the crew invited the firefighters on board Logos Hope, where they were given a tour and further explanation of the vessel's purpose and the faith that motivates those operating it. 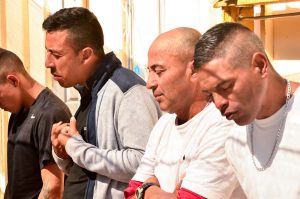 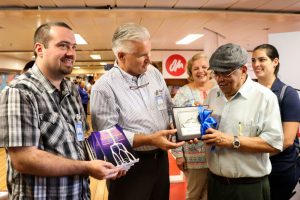 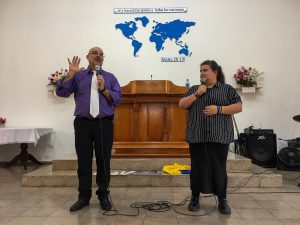 Logos Hope: Carpenter – Long and Short Term Roles Available Ships    Go & Live    As soon as possibleAs a Carpenter, you work as part of the Maintenance team who is responsible for maintaining adequate and comfort living and working conditions all around the ship. This includes safe and functional interior and furnishing in private, public and work areas, working sanitary spaces, managing fresh and waste water, air conditioning and ventilation, cold spaces, maintain routine check on various equipment and spaces.
Full Details
Logos Hope: First Engineer, Main Engine Ships    Go & Live    As soon as possibleJoin our international team of 400 people from 50 different nationalities. Have the opportunity to invest in young people and use your technical skills to keep a life-changing ministry operating. Being part of the on board community you will also receive personal input through daily team devotions and other ship events as well as the opportunity to experience the culture of the international crew and staff and the countries the ship visits.
Full Details
Church Mobilizer Chile    Go & Live    As soon as possibleTo build a bridge between the OM Chile and the local churches and other significant organizations.
To facilitate opportunities and resources to be involve in worldwide missions which is focused on the least reached and to make the Chilean church aware of the great needs for the mission fields.
Full Details
Logos Hope: AV Technician Ships    Go & Live    August 2020In our team, we oversee Sound Lighting and video support for the public events and programs run on board and onshore as well as for the internal programs aboard MV Logos Hope. Additionally we are responsible for all deck 4 audio and video systems, and all meeting rooms’ audio and video systems.
Full Details
Logos Hope: Electrical Officer Ships    Go & Live    September 2020For an Electrical Officer we are looking for an skilled Electrical Technician (preferably in the area of Power Production) that has experience in leading and managing a Team. With a minimum of 3 years work experience. Experience in the marine industry would be an advantage but not necessary.
Good interpersonal skills and being a computer literate are vital requirements. You will need to work with MS Office, AutoCAD & and a computer based Maintenance program called AMOS.
Full Details
Intensive Mission Training Coordinator Chile    Go & Live    As soon as possibleWe are seeking persons who will form part of our IMT coordination team. This cross-cultural training program seeks to prepare, equip and train missionaries to serve among the least reached people groups, most of whom are living in the 10/40 window.
Full Details
Logos Hope: 1 or 2 years on Logos Hope! Get on Board! Ships    Go & Live    As soon as possibleOM Ships International (OMSI) is a faith mission funded through gifts and revenue from the bookfair on board. All crew and staff serve as volunteers who raise their own support.

Volunteering on board Logos Hope, you will be impacted as you participate in this life changing adventure
Full Details
Finance Officer Chile    Go & Live    As soon as possibleOur team has a great need for someone to lead the finances and  provide data entry, finance analysis support, and generate financial reports.  Your duties will include providing accurate and sufficient financial information to the field leader in order to make ministry decisions, and to provide a measure of accountability in finance on the field and for OM internationally.
Full Details
Florence USA: Facility Manager Ships    Go & Live    As soon as possibleUse your practical skills to give oversight to the maintenance of our Florence, South Carolina property and facilities in order to ensure the property and buildings are well maintained and working effectively.
Full Details
Logos Hope: Industrial Electrician/Mechatronic Technician – Long and Short Term Roles Available Ships    Go & Live    August 2020Join our international team of 400 people from 50 different nationalities. We’re investing in young people and the opportunity to use and grow in your technical skills to keep a life-changing ministry operating. Being part of the on board community you will receive personal input through daily team devotions and other ship events as well as the opportunity to experience the culture of the international crew and staff and the countries the ship visits.
Full Details
LOGOS HOPE STEP Opportunity – STEP III 2020 Ships    Go & Visit    20 August 2020 - 4 November 2020Life on the ships is fast-paced and can be intense. Come with a servant heart, an attitude to learn, and willingness to be flexible and this could be the experience of a lifetime. Many who have been on STEP bear witness to the huge impact it has made on their lives, and to how God has worked in and through them.
Full Details
Florence SC, USA: Warehouse Manager Ships    Go & Live    As soon as possibleUse your organisational skills to manage all aspects of receiving and warehousing stock for OM Ships in Florence in order to facilitate the literature distribution ministry.
Full Details
All Service Opportunities
All Visit Opportunities