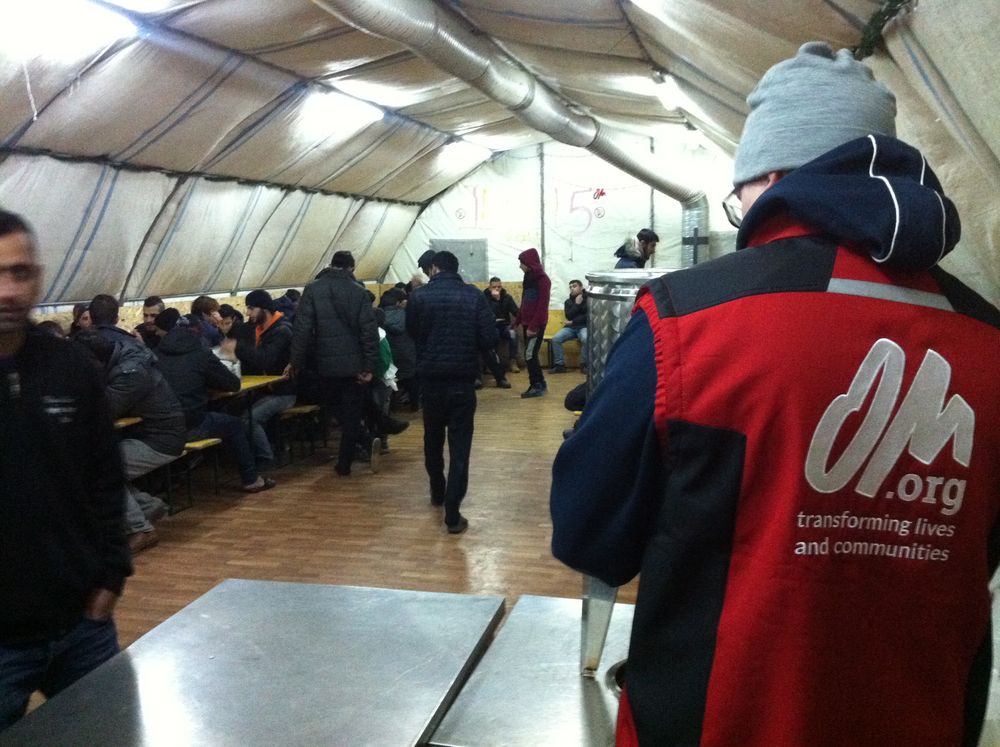 The OM field leader of the Balkan region, Volker Sachse, doesn’t cry easily. But in the past three or four years, he has often been moved to tears by the plight of refugees he has met in Serbia; OM has played a significant humanitarian role in one of the government-run camps there since the ‘refugee crisis’ in Europe escalated in 2015.

Today, however, it is tears of joy that brighten Volker’s eyes, as he describes how many refugees from Iran are turning to Jesus during a worldwide move of God amongst Iranians.

“It’s a privilege for me to witness the Lord touching so many Iranians in Serbia, including in the camp where OM works,” he shares. Commenting on OM’s mission to see vibrant communities of Jesus followers among the least reached, Volker says, “This is exactly what I see happening in Serbia amongst the Iranians! I would like to tell the outside world about people and events which could be from the first-century church.”

Volker shares the story of an Iranian, Ali*, living in Bulgaria, who has played a strategic role in God’s work in the Balkans. Ali is in his 50s, but as a young man he became a battle-scarred veteran of the Iran-Iraq war, and then pursued a life of extreme violence in the drug gangs of Teheran.

When the Islamic revolution broke out, Ali fled to Bulgaria and became heavily involved in the underworld as a major drug dealer. Convicted of murder, he was sent to prison. There, he was converted by a visiting Bulgarian pastor and immediately began preaching to his fellow inmates, many of whom accepted Jesus as Lord.

Ali was released from prison in 2015, just as a new wave of refugees from the Middle East entered Bulgaria from Turkey—a new route due to other borders being shut down. Ali started preaching the gospel to every Iranian refugee he met, and many responded, even becoming baptised right away, while still moving westward, crossing illegally into Serbia.

One of Ali’s contacts who accepted Jesus in 2016 was Farzad*. Ali gave him his first Bible and supported him when Farzad was baptised by a Bulgarian pastor.

“Farzad has become such a key figure in this whole story,” says Volker. Farzad had been an artist and photographer in Teheran, and as a divorced single parent, he had brought his toddler son with him to Bulgaria. Like many others, Farzad hoped to go to Germany, but after leaving Bulgaria, he found himself stuck in a Serbian refugee camp when the border with Croatia closed. It happened to be the camp near Sid where, under Volker’s direction, OM runs a community meeting tent and laundry services.

Encouraged by a dream, now networking for God’s kingdom

Volker has got to know Farzad well over the past two years and has seen how God has used him to share God’s love with other Iranians in Serbia.

In autumn 2016, when Farzad entered the camp in Sid, he witnessed to the handful of other Iranians in the camp but was cautious about how he did it—at that time, the presence of many strict Muslims in the camp created an atmosphere that tended to inhibit Iranian believers from openly identifying as Christian or meeting together to pray or study the Bible.

In the last year, though, many of the stricter Muslims moved to other camps in Serbia, and many Iranians have taken their place. Despite coming from a Muslim theocracy, many of the Iranians were surprisingly liberal in style and outlook, learned Farzad. Although there was now a more open atmosphere towards Christianity in the camp, Farzad was preoccupied by another thought: Since he still entertained hopes of reaching western Europe, should he try to cross the border into Croatia somehow?

He knew that most attempts resulted in failure, but many people still wanted to try “The Game”, as they called it. Even the Serbian government staff in the camp openly wondered why Farzad had not yet tried to cross the nearby border.

Then, one night in autumn 2017, Farzad had a powerful dream. The next day he sent Volker a message. “Farzad saw a highway filled with lots of people walking to somewhere beautiful,” says Volker. “But his own feet just wouldn’t move, he was rooted to the spot. He sensed the dream was from God, telling him to stay where he was.”

This realisation that God wanted him where he was led Farzad to become bolder in preaching and discipling, both in his native Farsi, and in English. He encouraged believers of every nationality to meet together for fellowship and built up many Christian contacts in the Iranian diaspora worldwide, using social media.

Suddenly, in early December 2017, the camp authorities announced they were moving Farzad, his son and two other single parents and their children to a camp over 160 kilometres away, near the Romanian border.

“This has had an effect like the apostles being scattered in the Book of Acts!” Volker exclaims, adding that Farzad witnesses tirelessly to the same mix of nationalities, and on social media, to Iranians in the rest of Serbia. “Really, everybody knows him!” laughs Volker.

A special volunteer from Germany

Amongst Farzad’s network is Ramin*, a German born in Iran who now pastors a Persian church in Germany that is linked to an organisation that builds God’s kingdom among Iranians everywhere. Ramin contacted Volker and became one of the volunteers that staffs the OM-run community tent in Serbia. In August 2018, he led Bible studies and prayer meetings for Iranian believers in the tent for five days, from 9:00 in the morning until 18:00 at night. Five people attended the first day’s Bible study, and the number rose to 20 by the fifth day.

“There was one Iranian Muslim guy who came along just to disrupt and criticise, but he gave his life to Jesus on the final day,” recalls Volker.

He shares, though, that there is ongoing need to nurture the young believers towards greater maturity. “So, I’m very excited by the possibility of running an intensive discipleship training course for up to eight Iranian believers over five days, which would then be repeated for a second group of eight.” says Volker.

The course, later this year, would be hosted by a nearby church in Sid and led by Ramin and others from the organisation he works with. The training would be aimed at equipping Christians to launch a church plant in the camp.

In August, Farzad travelled hours by bus to meet with Volker one day. Farzad said to him, “When I first became a believer, I knew that God loved me, but I couldn’t grasp that He loves everyone, even His enemies. But from my two years seeing OM in action, I know that God does love everyone…” And then he cried. “And I cried too,” says Volker.

Praise God for the openness of Iranians to the Gospel, and the increasing number of Iranian believers in the refugee camps in Serbia. As OM coordinates the discipleship course, pray for the finances and volunteers to fall into place. Pray, also, for God to lead Farzad and his son to a secure place and future. Lastly, please pray that God raises up more long-term workers to join OM’s work in Serbia.

For more information about how you can get involved, please visit OM.org or contact your national OM office.