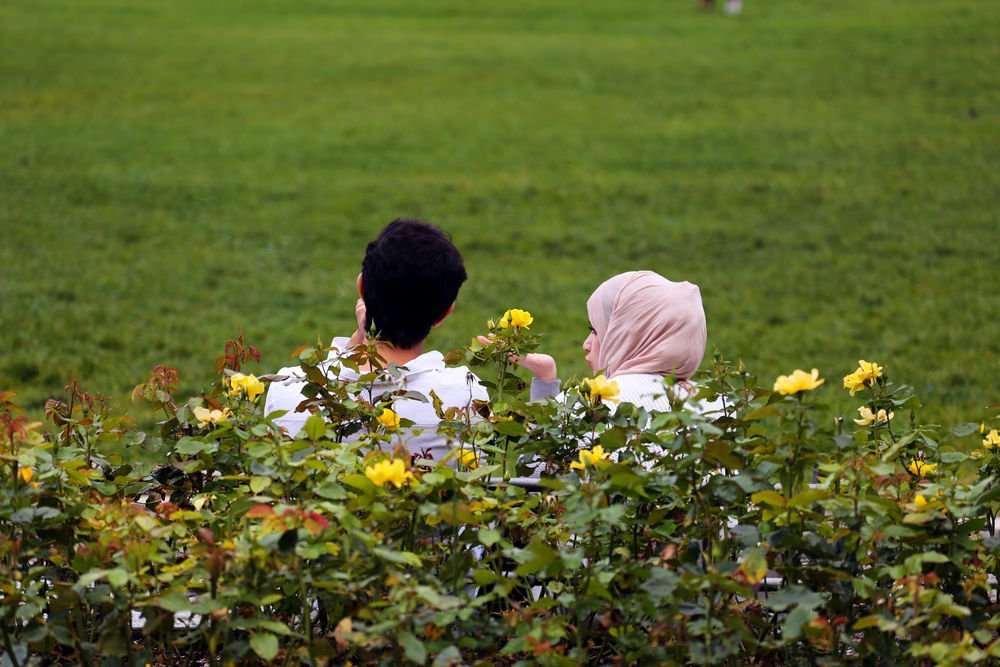 “We lived many years in the Middle East,” stated Rose*. “Yet, I had never seen any unaccompanied women. Here it is so easy to talk to them!”  Rose was taking part in an OM partner outreach in Interlaken, in the Swiss Alps, to put Arab tourists in contact with Jesus the Messiah. It was summer, and thousands of men and women from the Arabian Peninsula had escaped the heat of their home country to enjoy Interlaken’s lakes and mountain views.

Rose continued: “I met two teen girls from Saudi Arabia on a park bench and asked them in English if I might sit down. Then I asked if they knew Jesus. When I changed from English into Arabic, their eyes grew big. I told them of Jesus' power to heal and how He was even able to raise Jairus’ daughter from the dead. The girls listened attentively.”

She presented them with a micro SD card for their telephone. On it, the girls would find the whole Bible in Arabic, worship songs, The Jesus Film and many more valuable files. “Just a few years ago, it would have been unthinkable to get a chance to talk to teenage girls about Jesus. Now they will be able to read, hear and see everything on these SD cards for themselves,” Rose said.

Thunderclouds covered the sky, and just a few last rays of the sun found their way through a break in the clouds. The famous Jungfrau mountain was veiled in a thick haze. About a dozen tandem paragliders – buffeted by gusts – attempted their last landing on the big grassy field in the centre of Interlaken. Thunder rolled from a distance, but the tourists didn’t seem to mind as they continued their strolls.

Jane* and Joe*, also outreach participants, walked slowly along the tree-lined boulevard conversing in English. Every so often they handed a card or a flyer to an Arab visitor.

A young woman, accompanied by her bodyguard, showed an interest. Soon, the three were in a lively conversation. Although the thunder kept rolling, the rain held off. The Arab woman read the famous ode from the third chapter of the first letter to the Corinthians off the card she had just received. “That is deep!” she commented. “May I read these verses in the Injil?” referring to the Arabic New Testament the couple had given her. Many verses were sought out and read aloud and tears fell as the truth sank in. An hour later, the young woman understood the good news. Joe asked: “Is there anything we should pray for?” “Yes,” she answered. “I would like to receive a clean heart.”

In a niche on a crowded sidewalk, Hans*, another participant, played his guitar and sang well-known Christian praise songs in Arabic. In his open guitar case were some coins and small bills as well as pamphlets, booklets and DVDs. A note declared in both English and Arabic: “Take a free book or DVD!” Most people walked by, but some waited or even talked for a while. Others walked away with a booklet or a DVD.

A block further, in an open space beside a busy street, there was a market stall loaded with books, pamphlets and DVDs. Many tourists circulated up and down this street – most of them Arabs. They looked at the displays of expensive Swiss watches, Swiss army knives and handbags. Most women and older girls were veiled in colourful – but mostly black – burqas. An Arab man scanned a huge QR code printed on the tarp of the stall with the words: “Did you ever have a dream of Jesus, the Messiah?” The code would activate The Jesus Film on his cell phone. On the other side of the tarp, another member of the team conversed animatedly with two Arab ladies, while a man dressed in a signal vest, also printed with the QR code, passed out welcome pamphlets.

Outreach participant Helga* told of one of her experiences: “As I strolled along a lane, I passed a couple sitting on a park bench. The woman was clothed all in white and did not wear a veil. I stopped, greeted and bid them welcome to Switzerland. Immediately they got up, came up to me and shook hands with me. ‘Is it not beautiful here?—a gift of God,’ I commented. ‘Yes it is! We believe in God too! It is our sixth time here in Interlaken,’ she explained. After some further talk we exchanged phone numbers and email addresses. ‘I will wait for you here when you come next year! Then I will have a DVD with the Matterhorn (a DVD explaining Switzerland today and its Christian history) for you,’ they said as we ended the short visit. The timing was just perfect!”

During the last decade some tourist spots in the European Alps, particularly lakeside resorts, have become increasingly attractive for tourists from the Arab Peninsula. Burqas and abayas often in black, but also in all colours of the rainbow, dominate the alleys, lanes and boulevards in towns like Interlaken, the Austrian Zell am See, or Montreux. About twelve years ago, some Christians realised the invaluable opportunity to present the good news to men and women from closed countries in a neutral environment. In several cities and towns, outreaches were organised to make contact with Arab tourists to talk with them — and if there is an opportunity — to present them with a Bible.

Currently OM works together with several Christian organisations and local congregations to host outreaches in Geneva, Montreux, Interlaken, Lucerne, Zürich, Interlaken and even in the 'Heidi Village' of Maienfeld. Similar outreaches take place in the Austrian Zell am See and in the German Garmisch and Munich.