Ribka and Boyd and their three children, an Australian family, live in a quiet village near Zaventem in Belgium. It’s even quieter now since the planes from Brussels stopped flying overhead during the coronavirus lockdown. One evening at 20:00, the family heard their neighbours clapping and cheering outside — an unexpected outburst in their suburban street. “It took us a moment to realise they were thanking the health care workers,” Ribka said. “We started joining them, and then another and another household joined us, until we were around six households.”

Forced into seclusion in their homes due to the pandemic, neighbours began to make the most of being able to wave or greet each other from afar. “It’s been a chance to say hello to those we don’t normally see and make sure everyone is alright,” Ribka shared. The time of crisis and isolation sparked a desire to connect in ways that were still possible. “We’ve not experienced this community spirit in our neighbourhood before!” said Ribka with joy and excitement.

Ribka and Boyd moved to Belgium two years ago to begin OM’s new Prayer Hub in the nearby town of Zaventem, where they lead prayer and worship. “When we came, it would have been really weird to knock on our neighbours’ doors to introduce ourselves,” expressed Ribka. This year, motivated by a greater willingness to interact, Ribka and Boyd sent Easter cards to their neighbours. They wrote, introducing themselves as the Australian family, and wished everyone God’s blessing of peace and hope. A few days later, the family received cards and a gift in return. “We were encouraged to see their openness to receive something nice and then reciprocate it,” Ribka said. After considering how else to contribute, they decided that Boyd could share his gift in singing and playing guitar by putting on a balcony concert. They sent out flyers to let locals know of the planned event.

At 19:00 on the Friday evening after Easter, Boyd set up his microphone and little speaker on their balcony. “I was a bit nervous beforehand because I wasn’t sure who would bother to come outside as we hadn’t had responses to our flyer,” said Boyd. However, within a minute of his sound check, people started to appear on their front lawns and from the street behind the family’s house. “Some brought out picnic chairs, others stood on our street and cyclists stopped to listen,” Ribka described.

“I would call myself a pastoral musician,” explained Boyd. “My heart is always to be an encourager, so that evening I chose songs to encourage.” Boyd sang two covers as well as his own songs, reflecting on relevant themes of supporting each another and what it means to be away from loved ones. “I wanted to encourage us as neighbours in how we can help one another and foster those relationships beyond this time,” he shared.

“A lot of my songs are prayers and pretty much all are written in the context of the gospel,” said Boyd. He believes that if individuals have ears to hear, they will hear what the Spirit is saying through his songs. “I always pray before these experiences that we can make room for God’s glory and that He can work through me, or despite me,” continued Boyd.

After half an hour, the listeners didn’t want to leave and stayed on for a further 20 minutes. “I really enjoyed seeing people come together as much as we were able whilst still keeping a distance,” emphasised Boyd. “I enjoyed the community spirit of people responding to one another as well as to the music.”

Ribka expressed that people in Belgium are alarmed by the rate of those dying from the coronavirus. “We are looking for ways to demonstrate hope in the midst of this,” she said. The balcony concert created an environment and atmosphere for stillness and contemplation. Afterwards, one neighbour brought a thank you gift and expressed that the lyrics had been uplifting.

“In people’s responses, I felt they appreciated that there was room to think about our current situation and life,” reflected Boyd. “It wasn’t just something to help pass the time, pretending that nothing is going on; we continue to pray that God is ministering to people in their homes at this time.”

Thankful for opportunities to make connections whilst social distancing, Ribka and Boyd look forward to having further conversations, following up on an invitation to dinner, and being able to deepen relationships once restrictions are lifted. “We would love to invite guests over or organise a street party,” said Ribka with enthusiasm. “We hope to maintain this sense of community spirit!” 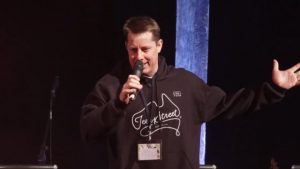 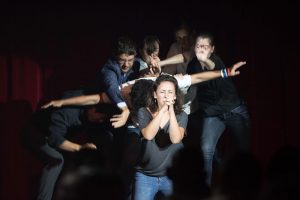