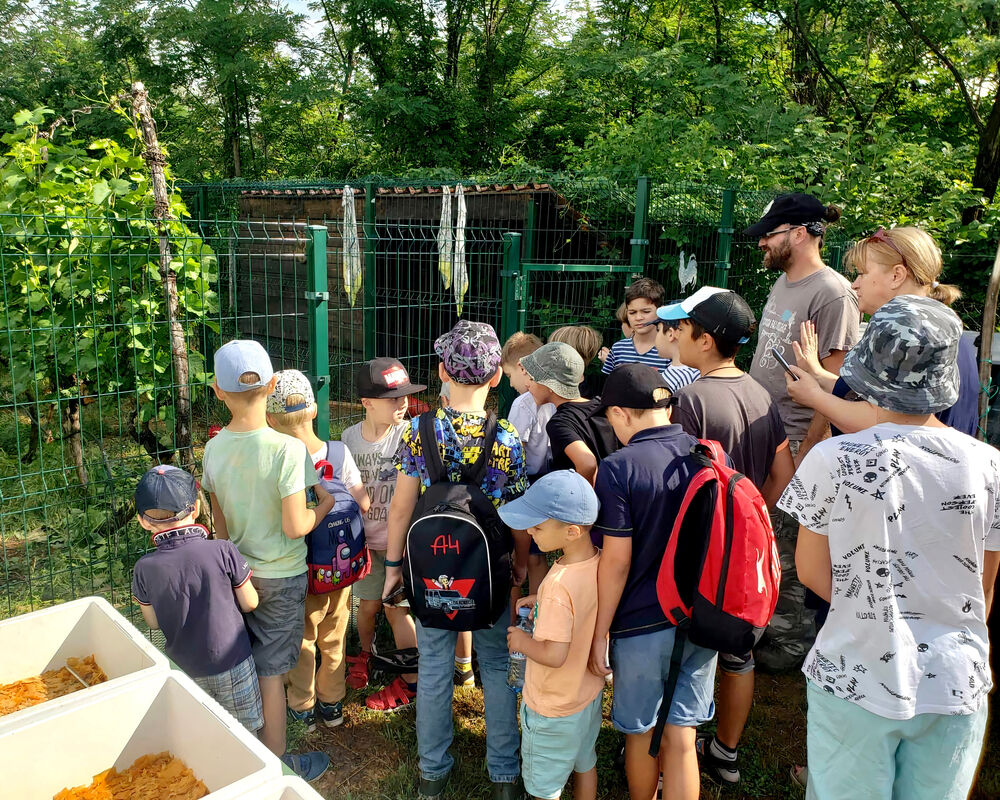 Jesse and Andrea McCourtney (US) and their four boys share God’s love through a lifestyle of invitation; this includes everything from digging in the dirt to hosting community classes, donating produce, going on adventures and everything in between.

Both Jesse and Andrea were raised in families of believers. Andrea began following Jesus at age six when her mother shared the gospel with her after a church baptism service. Six years later, she committed to serving God overseas while at a Christian children’s camp.

As a teenager, Jesse’s friends challenged him when they shared Jesus’ words in John 14:6: “I am the way, the truth, and the life. No one comes to the Father except through me” (NIV). “I read the verse, then the whole chapter, and eventually the entire book of John, realising it was true, and I accepted it,” he said. “A few years later, after a week of missions conferences in college, I heard God say to me: ‘You are going to go.’ At first, I was unsure, but when I told my friends, they said: ‘We felt like God is saying that to you too.’”

Jesse and Andrea met in college. They dated, dreamt of serving God overseas together and went on separate short-term trips to Eastern Europe: Jesse to Montenegro and Andrea to Bosnia. After graduation, they married and focused on building their lives in the US: paying off student loans, buying a house and starting a family. “We had plans for a fence for our house and laser eye surgery,” Andrea remembered, “and I had the ideal job: teaching gardening in public schools. As a kid, I had dreams of working with teens and animals, and I was literally living my dream.”

Then God reminded the couple of their shared dream to serve Him overseas. After much prayer, they chose Montenegro, a small country in Eastern Europe they had previous ties to through a college friend. Within two years, they moved with their one-year-old and one-month-old sons to the capital city of Montenegro, and over the next few years, they grew their family and reached out to the community through ministries to teens and kids, summer camps, teaching English and more.

However, they found Montenegro to be a hard ground for the gospel to take root due to cultural traditions, suspicion of foreigners and language barriers. “The majority of Montenegrins are Serbian Orthodox, with smaller minorities as Muslim or Catholic,” Jesse explained. “Religion here is more tied to ethnic identity than it is faith, and changing religions means you are turning your back on your ethnicity, family, community—everything. Montenegro was a tribal country less than 150 years ago, and there is still very much a tribal mindset.

“The Church here is very small and new, having started in the late 1990s. When we first moved here, there were only 200 believers in the country. The percentage of Orthodox believers who follow Jesus is small because most are Orthodox in name only. It’s not uncommon to hear someone say: ‘I am Orthodox, but I don’t believe in God.’ They aren’t offended to talk about faith and are even willing to talk about it, but they are also set in their ways. To them, family is the most important thing—if following Jesus means losing their families, they aren’t willing to do it.”

Passing out tracts, street evangelism or hosting outreach events aren’t effective in Montenegrin culture, the McCourtneys explained, because if the host isn’t part of a clan or doesn’t have a relationship with one, no one will come. Andrea said: “Because family is the centre of everyone’s world, we need to minister to whole families. The best way the gospel will spread is by encouraging believing families to be the Church and share Jesus with others.”

A few years into their time in Montenegro, the family started asking a simple question: what were ways they could do good things in the heart of the culture?

God began to grow a dream in Andrea for a community garden that held family programmes. She prayed for four years, but finding land was difficult. In 2019, the couple found a house with one acre on the Zeta River. It was perfect, but their offer was denied. Discouraged, they almost gave up. Nearly a year later, God gave Andrea Proverbs 31:16a, which says: “She considers a field and buys it” (NIV). That day, she borrowed a car, drove back to the property’s owner and made another offer—without knowing if the land was still for sale or not.

The offer was accepted, and in late 2020, the McCourtney family moved in and slowly started renovating the property and working the land. In September 2021, Basta Zeta, “Garden on the Zeta River,” officially opened in front of a group of 50 people.

In addition to the garden itself, Andrea and Jesse teach free workshops every Saturday morning, with topics such as animals, nutrition, plants and insects. During the week, they host schools and field trips. The garden donates the produce from the harvest and makes food packages for low-income families.

The garden has reaped unexpected fruit as well. “People ask me all the time why we are doing this,” Andrea said. “This—gardening and teaching kids about caring for God's creation—was something that I thought I had to surrender to serve God overseas, and He brought it back to me. I love what I do, and that comes out in everything I do. It makes me a joyful person, which draws people in. We’re not secretive about being Christians, but we’re not allowed to openly evangelise to children without parental consent, so this is a way we can share God’s love through our lives.”

Since the garden opened in September 2021, over 700 people in total have visited, including local environmental activists and the local news. Newspapers have reported on it, and the country’s Minister of Agriculture began following the garden’s Instagram account. The raised beds in the garden have not only protected plants from the busy feet of children, but they also yielded an extra blessing: easier access for children in wheelchairs to take part in the activities.

The food grown is donated to both Protestant and Orthodox food ministries, which forms connections and builds relationships between the churches. And by buying a home and planting the garden, the McCourtney family has been able to grow roots in the local community—giving them relational access like they didn’t have before. “We use a type of gardening where you create healthy soil as you garden, instead of disturbing it from the outside,” Andrea shared. “This is a great analogy for what God has done in us—and how the Spirit moves through us to reach others. Instead of taking a pickaxe with the gospel and trying to change people’s hearts through force, He uses the fruits of the Spirit to touch people’s hearts to want to know more. A lot of what I’ve learnt in the past 10 years is to stop striving, to let the Spirit work and follow Him.”

Jesse added: “In Jeremiah 29, God tells the exiles to build houses, plant gardens and seek the peace and prosperity of the land. Our first few years here, we were striving because we wanted to do big things for God. Then God said to us: ‘It’s not about what you do for me; it’s about who you are in me.’ If our mission is solely to be obedient as we follow Him, then we are successful. He will bring the fruit.”

This fall, the McCourtneys will celebrate 10 years in Montenegro, and Basta Zeta will complete its first full year as a community garden—and it is just the beginning. Jesse and Andrea dream of more ways God can use their family and their land, like developing the forest and riverbank for older kids to learn about forestry and nature conservation, hosting river activities and maybe even having a ropes course one day.