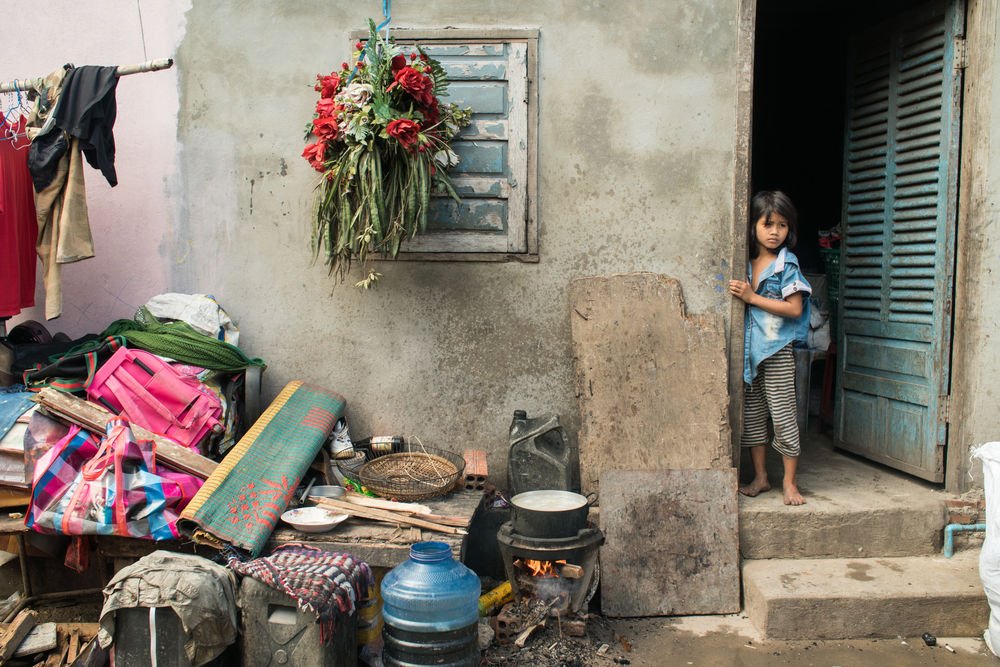 Countless issues plague the poor in Phnom Penh, Cambodia’s capital. People lack access to good jobs, which leads to poor nutrition. Sometimes they don’t eat for days. Domestic violence destroys families. Adults and children alike turn to alcohol and drugs for answers. The risk of human trafficking is high, caused not only by pimps who stalk the communities but also by overwhelmed single mothers who consider selling their kids for cash. Those seeking medical help go to the hospital, but without money to pay upfront for treatment, they are left lying on the waiting room floor. Many never even make it out of the slums.

The list could go on, said Tanja, the new social worker supervisor for the OM Mercy Teams International (MTI) office in Cambodia. To counter this brokenness, OM works with communities in four nearby slums, providing informal counselling, parenting classes, and, on a case-by-case basis, money for medical treatment or housing assistance.

Tanja, who worked as a psychiatric nurse in her home country before moving to Cambodia, said sometimes the most basic medical knowledge can have dramatic effects. For example, she heard that people in the slums did not drink a lot of water and constantly had kidney problems. “In one of the programmes, I asked the parents if they often had pain in their back, gave them advice to drink and explained why,” she recalled. “The next week, I asked who did it. Two or three women did, and [their pain] was over.”

Another client had diabetes, so Tanja explained “what’s happening with your blood sugar when you’re active, when you’re eating, when you’re resting—and suddenly it opened their eyes. It’s sometimes so basic what you can do.”

“But also, for me, it’s a very important thing to share the gospel, to really be the hands and feet of Jesus,” she emphasised. “It’s helping them and standing next to them and supporting them.” 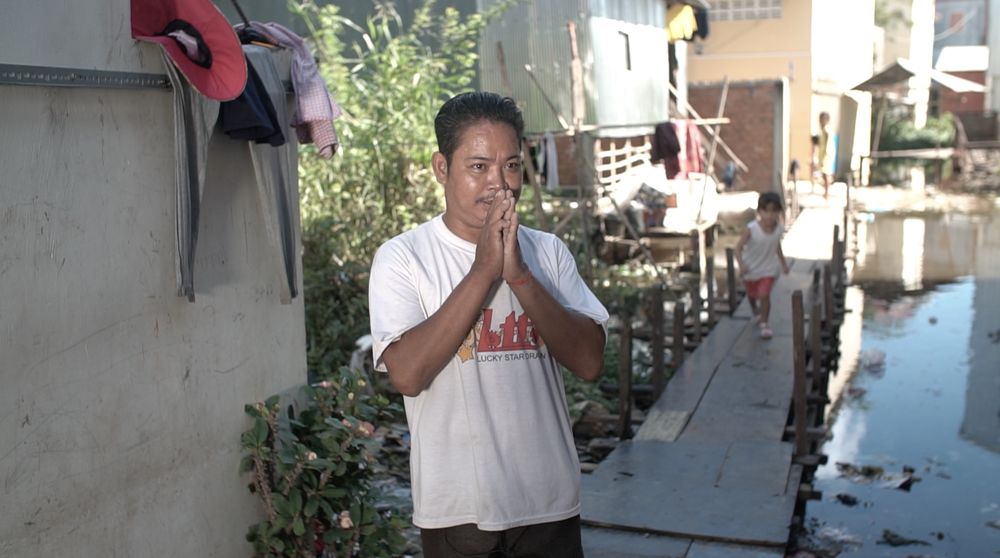 With one pant leg pulled up, exposing a still-healing wound, Kov Domw, 47, leaned against the doorway of his simple tin house and shared the difference OM MTI had made in his life.

“I had a relationship problem with my children. They didn’t listen to me or obey me. I forced [my son] to go to school. He went but didn’t study, and this made me angry,” Kov explained via a translator.

“I tried to solve the problem by myself. I tried to drink alcohol, so I could sleep and not think about this problem,” he continued.

Kov’s wife and children collected and sold rubbish—one of the most common ways people in the slums earn a minimal amount of money—but Kov, a construction worker in a nearby luxury apartment development, carried the main burden of providing for his family.

When he was waylaid with an injury, OM stepped in, providing money for his hospital visit, enrolling his children in the family sponsorship programme to supplement their educational costs and inviting Kov to the parenting classes at the office.

Although Kov was still waiting for his leg to heal completely before returning to construction, he said that the situation in his family had improved. “We listen to each other, and my children obey me better than before,” he said. “Before I used violence, and I was very strict with them. But now I have changed. I try to …understand their feelings, and I use sweet words with them.” 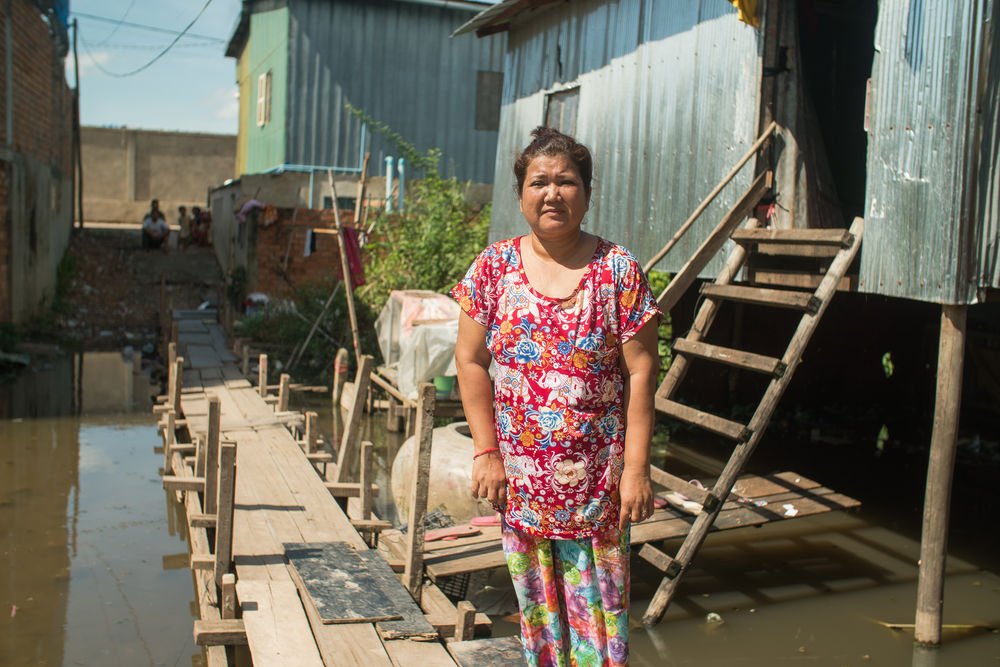 A few metres down a ramshackle wooden pier used as a walkway, Srey Sina waited in front of her house. Patchwork sheets of blue and silver sheet metal were plastered around a handful of wooden support beams, the reinforced living space elevated above the murky black swamp water surrounding the slum. But Srey beamed as she sat on the rickety wooden ladder leading up to her open door.

The sole caretaker for her two young children and a niece, she talked through a translator about what happened after her husband passed away. “My children were very small. …We worked to collect the rubbish. After that, I got sick. I have high blood pressure and diabetes. I have another illness, too.”

At her lowest point, she encountered OM MTI. “MTI was very kind. They came and visited me and invited me to the office. They did counselling for me; afterwards, they supported my children [to go] to school,” she said.

OM MTI also invited Srey to join their parenting skills class. “Before I didn’t know how to talk with my children,” she shared. “After I joined the parenting programme, …the situation in my family has changed. My children listen to me. We talk, and we understand each other.”

Since Srey was impacted by OM MTI’s ministry, she has also recognised the work they do in the community. “MTI has not only helped my family, but they work around here, too,” she noted. “When the people here have problems, they go to MTI… because MTI works with the real poor families.”

In addition to meeting physical needs, OM MTI reaches out spiritually. Through OM MTI’s ministry, Srey started a relationship with Jesus. “I believe in God, so I …pray for MTI to stay in Cambodia for a long time.”

“The staff have the heart to love the poor,” she added. “They always come and listen to their problems. They try to solve the problems of the poor people, and they train people how to communicate with their children.” 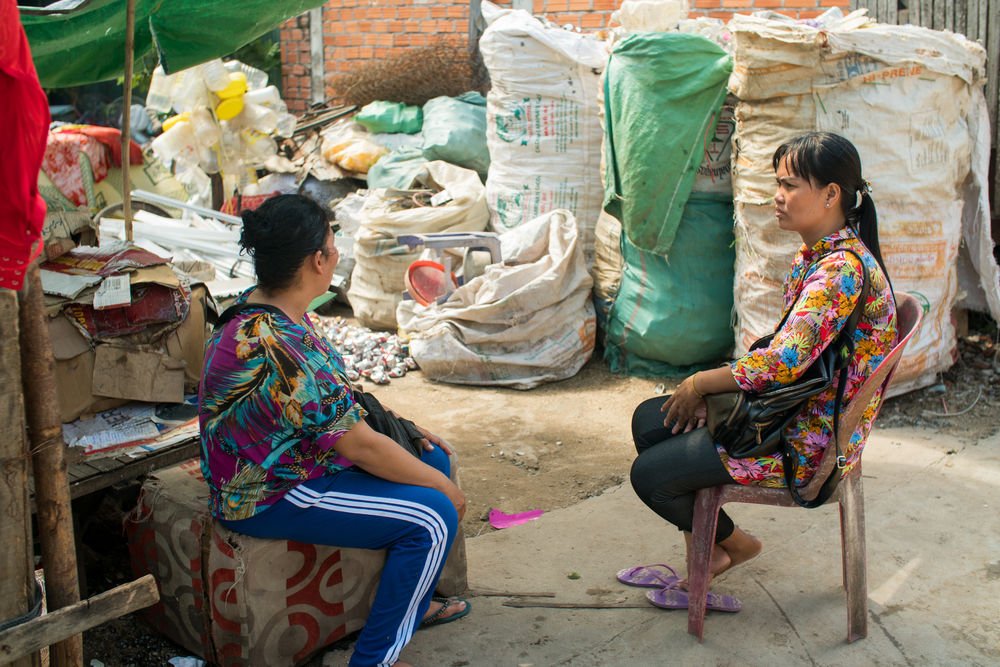 Mom Som, a senior social worker who has worked with OM MTI for 10 years, intimately understands the needs the organisation addresses: she grew up in the same slums where she now serves.

By the age of six, Mom was responsible for her family. Her mother became ill after Mom’s father died, so Mom collected and sold rubbish to earn money. She suffered domestic violence and almost became a victim of human trafficking. In a moment of panic, she prayed to God and was miraculous rescued. After she became a believer, Mom prayed that God would change her area.

“In Cambodia, many people don’t know how to talk with their children when the children do wrong—they just beat them. Me, too. When I …did something wrong, my mom beat me. But in our parenting programme, we [teach] the parents how to pray for the children, how to communicate in a good way. We change how they discipline the children,” she explained.

“MTI is a place to share the gospel with the person who is suffering. We not only share the gospel, we would like to see their lives change… Every day, clients and children come here. [They learn] skills, they learn English, but more importantly, they hear about Jesus, and God can transform their lives. I believe the Word of God can change their lives, like [it changed] my life.”

According to OM Team Leader Johan, the OM MTI workers have often prayed for very sick people and seen God miraculously heal them. Several people in the slums have become believers through OM MTI’s programmes. Recently, the workers have been evaluating how their work can focus even more on Jesus. “Now we are moving to reach out and share the gospel first,” he said. “We will use more study programmes or more videos or plays… to share in a way the people can understand.”

“We ask people sometimes if they know who Jesus is. [They say,] ‘Who is that? Is that a car?’ They have no idea who Jesus is. So we really need to reach out to them in a way that they never forget the name of Jesus.”

Nicole James is a world traveller and writer for OM International. She’s passionate about partnering with fields to communicate the ways God is working across the globe.