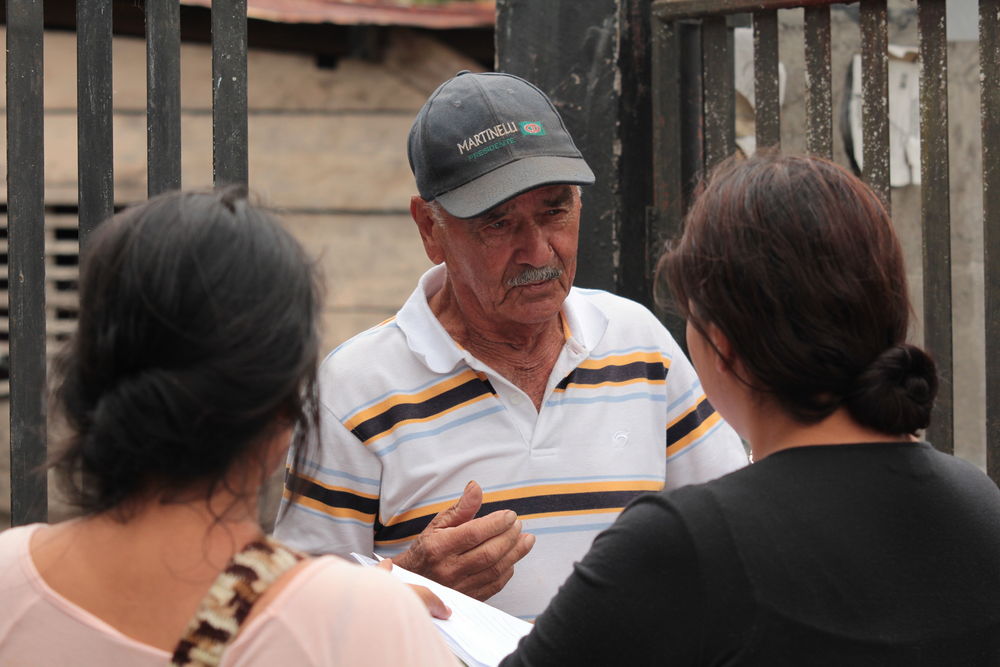 Martin Gaydou (Argentina), of La Falda, Cordoba, grew up reading stories of missionaries and always wanted to go on a mission trip. But he felt like it was more just a desire of his and not a calling of God.

Then he heard about a two-week mission trip to Panama through OM.

Martin, 41 years old, married with three daughters, works as an independent plumber and electrician with gas installations. The trip would be in rural Panama, in the mountains, and would require nine days of camping in rustic conditions, as well as a lot of hiking, something he loved to do.

“When I found out the requirements of the trip, I felt it was really God calling me—and that He had been preparing me for it all along,” he said.

Then Martin found out the price of the trip—$1,500 USD—and was really discouraged. “It was impossible for us,” he remembered. “But God can do anything.”

Martin thought about what an OM worker had told him when he first learned of the trip: “The numbers are scary, but it’s not such a big amount, and you have time to raise it.” Another had told him, “I encourage you to pray about this trip.”

Martin realised the trip was about more than him going—God wanted the local Argentinian church to be involved as well. “So I came into action and shared the project with the churches in the area, with friends and with family. The response was brilliant! Within two months, I had all the expenses covered.

“That’s how God showed His power.”

The only thing left was for Martin to get on a plane.

For the 13 days he was in Panama, Martin taught Bible school for kids every morning. One night he preached in the local church. Even though he spoke Spanish, it was a different dialect than Castellano, and the culture was completely different. It was a great learning experience in cross-cultural communication for him, and he was able to see God work through him.

The night he spoke at the church was a clear, beautiful night in the mountains of Panama. The area was lush, so full of vegetation it was difficult to even see homes underneath the trees. As he waited for the church to start, Martin noticed little bright dots in the air. They looked like fireflies. But then he realised it was a family arriving with a lantern, then another and another. “Those lights moving in the darkness were families walking through rocks, mud and darkness. They overcame all of those obstacles to sing to God and listen to His Word. Others were there out of curiosity, because no one ever goes there to visit. Some of the people who went to the service came to Jesus,” he recalled.

On his last day in the mountain village of Alto Pedregal, Martin knew there was a long trip before him. It’d taken two days of driving and walking to get there in the first place! He and the others in his group loaded up their backpacks and began to walk as the locals stood around, watching them.

“We were already on the move and moving further away when a young boy, that was previously filming us with his phone, came to us. He walked with us a few steps in silence, until he couldn’t hold it anymore and said, ‘We don’t want you to leave.’ Those words broke my heart.

“Those two days with them were brilliant. They took care of us, gave their best so we could rest and, while leaving, they opened their hearts with those few words to express their affection and need.

“I will never forget those words.”

Now back from his trip to Panama, Martin recalled what God taught him on the short-term mission trip: “He is the one who chooses the workers, the way He wants, when He wants. There’s no distance or resources that can keep Him from carrying out His will.”

Martin doesn’t know what his next step is or if he’ll get to go on another trip, but he plans to keep sharing with the churches who supported him. There’s one thing he knows for sure—God called him specifically to go to Panama.

About the sending organisation, Martin said, “I totally recommend OM to do missions. I had never even been out of the country before Panama. OM always supported me, gave me advice and information when looking for a ticket, making reservations, etc. OM walked with me through this project in Argentina as much as in Panama. They helped with everything.”

Kate Toretti loves to tell stories about what God is doing in the world. She currently serves as the field communications facilitator for OM in Argentina.