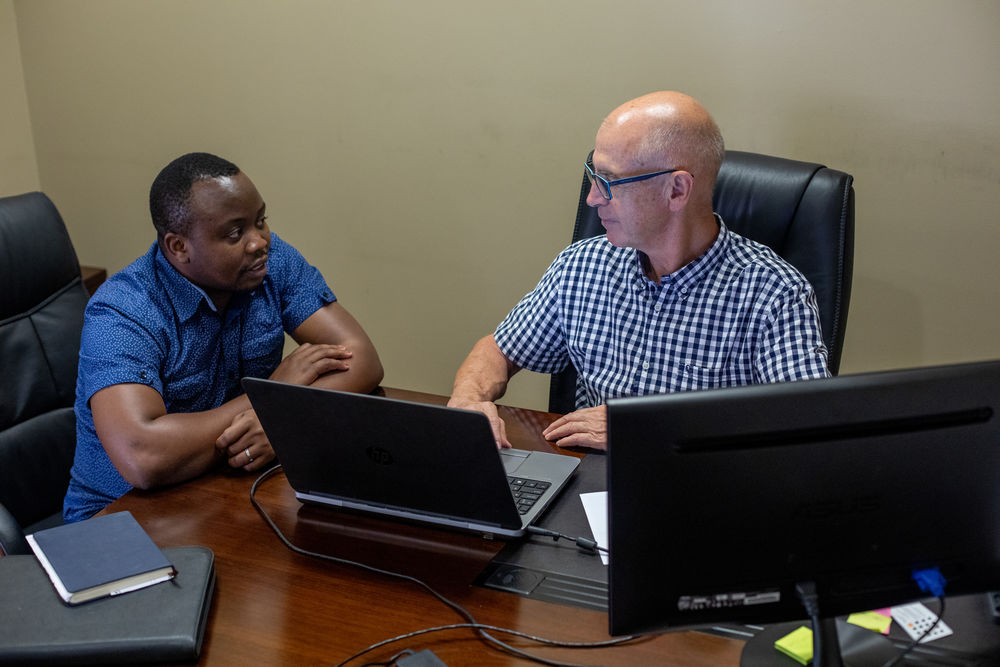 “I think if you do things differently, you make people think differently,” shared Van Zyl from South Africa. “Cause normally someone my age doesn’t train as much as I do. Or change careers and work twice as hard as he’s normally done in his life!”

“The last 40 years consisted of four careers and now I’m on my fifth one,” he explained, citing his time spent in the air force, defense industry, working in an investment bank and as part of a small corporate finance team facilitating transactions for small companies and listing them on the local stock exchange.

Looking at retirement, Van Zyl decided he: “wanted to contribute to other people’s lives with no expectation.” So he began sifting through volunteer opportunities from around the globe on the internet. But the more he looked, the more Van Zyl felt God telling him he was supposed to stay where he was in South Africa. One night at his church’s home group, he spoke with another member about the organisation she served with. As she described her role in financial development with OM, Van Zyl was amazed and said: “That sounds like what I’m doing in the finance world. Do you have a job for me?”

The answer was yes.

It was the link between faith and his work experience that interested Van Zyl. Now, he helps teams raise funds, plan strategically and communicate with donors to help further the work God is doing in 13 countries across southern Africa. “I have found that, working with the different fields, I can help the young people grow in their roles and support the Field strategically – aspects of my career that I loved to do, and now continue to do so,” said Van Zyl.

“I had lunch with one of my clients and he said: ‘So, what are you doing? Are you getting paid for [working with OM]?’ And I said: ‘No. You don’t realise that what I’m getting is much bigger – you can’t comprehend it in terms of money returns. It’s multi-dimensional. It’s much bigger than anything money can give you.’”

Van Zyl started cycling at the age of 53 as a way to stay in shape but it quickly became something more. “When I’ve got something, then I use it – it’s not going to collect dust in the corner,” he said. “So I got a bicycle and I cycled.”

Today, Van Zyl cycles a minimum of three times a week, covering around 200 km total. The mornings he rides he sends out a WhatsApp to a group of cyclists describing the route and people join if they can. “I can see that it has changed some people’s lives in a different way because they hang out in that group,” said Van Zyl.

The group is made up of riders of different fitness levels and goals; some are riding to improve their overall health while others are training for races. “The group provides this environment – you’re never alone on your own fitness journey whilst being involved in the journey of others,” explained Van Zyl. Cycling together—sometimes for hours—also provides time to talk. “I have found that there’s a lot of counselling happening on these long rides,” Van Zyl said. “I just listen and try and provide a different perspective on the situation that [the person] finds themselves in.”

In 2019, Van Zyl joined Ride 2 Transform Malawi (R2TM) – a seven-day cycling trip through Malawi with the purpose of praying for and ministering to the unreached people groups living there. “The cycling is actually easy,” remembered Van Zyl. “For me it’s more about spending time with missionaries, seeing what people do and engaging with them.”

Faith can’t be a hybrid

Van Zyl grew up in the Dutch Reformed Church in South Africa. There was a period in his early twenties when Van Zyl wasn’t very committed to going to church but “somewhere along the line I decided you either take your faith to a serious level or just ditch it – it’s not like a hybrid.”

So he took his faith to a serious level.

In living out his life for Jesus, Van Zyl became involved in serving within the various churches he attended over the years; usually as an elder, deacon or by being on the church board. “Now I’m a car guard,” he said. “I smile at people and make small talk in the parking area.”

Van Zyl said that while the job might not be what the average church-goer would volunteer for, he enjoys it. “I’ve had some serious chats on relationships with other guys on the team, whilst on duty! Oh, and I do manage to welcome the people!”

‘Doing things differently’ has helped Van Zyl start conversations and share Christ’s love with the people around him and he urges others to do the same.

“Walk out of your comfort zone. See what opportunities God opens up for you; and with His guidance and assurance, embrace them and get involved. It’s a world full of surprises – like me ending up in my current role in OM!”

Hope shining through the darkness

The honour of connection

AIDSHope Team Member South Africa    Go & Live    As soon as possibleAre you young or young at heart and love to live and work within a community?

AIDSHope is in need of team members with a variety of practical skills and a passion for ministering. These ministries include outreach to those using drugs, Kid’s club, after-school programme (primary school), youth discipleship.
Full Details
Diaspora Hope –  the Least Reached South Africa    Go & Live    As soon as possibleIn the Mother City called Cape Town you will find our team in many different places sharing the love of Christ with people. Some are on the streets in various market areas and others are at our Empowerment Centre called: Chanua. Chanua is a Swahili word meaning “Thrive”. We don’t want people to simple survive but to thrive both in a practical way and spiritually.
We befriend foreigners and neighbors from other faiths.
Full Details
Africa Trek Internship September 2020 South Africa    Go & Visit    6 September 2020 - 3 August 2021The Africa Trek Internship is a leadership development and discipleship program. It seeks to develop young people with potential and disciple them to become high quality, effective disciple-makers and leaders who know their identity in Christ and who know their calling. The Africa Trek is a challenging environment and acts as an effective medium in developing leaders efficiently, achieving great results in a short time span.
Full Details
Training Officer South Africa    Go & Live    As soon as possibleAre you ready to make an impact in South Africa and the world!

OM has been training OM workers for more than 30 years.  We are developing a whole new package to equip workers for the least reached.  We are looking for someone who can train people, teams and develop  training programs.
Full Details
AidsHope – Meetse a Bophelo Centre South Africa    Go & Visit    Various Dates: See DetailsUphold the value of others, especially children
Full Details
Finance Manager – Africa Area South Africa    Go & Live    As soon as possibleWe are looking for a new Finance Manager for our Support Services Hub in Pretoria, South Africa, that serves the workers & projects in over 12 African countries with accounting, payroll & compliance work.
Full Details
Mission Discipleship Training (MDT)
Tankwa Camino Freedom Challenge South Africa    Go & Visit    29 July 2020 - 10 August 2020The purpose of this challenge is to raise awareness, funds, and prayer support for vulnerable, marginalized, and exploited women and children throughout Africa, while identifying with enslaved people and the long climb they have to find freedom.
Full Details
AIDSHope Administrator South Africa    Go & Live    As soon as possibleAre you passionate about using your administrative skills for a ministry in Mamelodi, South Africa?

AIDSHope is in need of someone with administrative skills who is also willing to be involved in various areas of our ministry.
Full Details
Personnel/HR Team Member South Africa    Go & Live    As soon as possibleDo you enjoy working with people? Do you enjoy administration? Come join our Personnel Department in South Africa!
Your roles in summary will be to help with recruitment & ensuring the well being of all the people in OM South Africa.
Full Details
Diaspora Hope –  the Least Reached South Africa    Go & Live    As soon as possibleIn the Mother City called Cape Town you will find our team in many different places sharing the love of Christ with people. Some are on the streets in various market areas and others are at our Empowerment Centre called: Chanua. Chanua is a Swahili word meaning “Thrive”. We don’t want people to simple survive but to thrive both in a practical way and spiritually.
We befriend foreigners and neighbors from other faiths.
Full Details
AIDSHope Maintenance Team Member South Africa    Go & Live    As soon as possibleDo you want to serve God by using your practical skills?

AIDSHope is in need of someone who likes to do repairs, wants to help with maintenance and who is willing to be involved in various ministries.
Full Details
All Service Opportunities
All Visit Opportunities