The opportunity to earn a sustainable income has already been a game changer for the 25 men and women working at the VillageWorks handicraft centre outside of Phnom Penh, Cambodia. But a handful of OM’s Mercy Teams International (MTI) workers want to see the VillageWorks employees gain something more: eternal life.

During work days, the spacious VillageWorks warehouse hums with the near-constant buzz of sewing machines. Bent over their tables, the employees focus on turning brightly patterned fabric into wallets, purses and other useful knick-knacks to sell at Fair Trade shops in Cambodia and abroad.

At the end of the work day, twice a week, two or three OM MTI workers host an hour of combined English and Bible studies. One of the workers starts the lesson with prayer, then the group often sings “Give Thanks” in English, the song’s chorus written in fading blue marker on the top left of the room’s large whiteboard. The lesson consists of an OM MTI worker reading from the Bible in English, phrase by phrase, which the VillageWorks employees slowly repeat. Then he or she writes vocabulary words on the board while another OM MTI worker, usually Dara, reads the same passage out loud in Khmer.

The difference between this company and other sprawling production factories in Cambodia (besides the size) is that all VillageWorks employees have polio. While working, the artisans barely exhibit their disabilities—a few sit in wheelchairs parked behind their workstations; one woman eases her foot brace into a sandal. It’s the effort that many exert to move, shuffling slowly across the room or propelling themselves forward using the backs of chairs and tables as handholds, that most clearly shows the disease’s effects.

Still, the fact that they have jobs makes a difference, said Project Director Anak. VillageWorks was started in 1997 by a missionary from Malaysia and subsequently supported by the Girls’ Brigade Singapore. In 2006, Cambodian staff took over the project. “I feel it is my mission to help my people have a sustainable income,” Anak stated.

Through the Bible lessons, some of the employees have accepted Christ; seven people were baptised in 2017, OM reported. OM MTI supports the new believers and follows up with them. “They are like counsellors for them,” Anak added.

“I’m not forcing them to be Christians,” she clarified. “Some are not, but we want to tell them the good [news].” 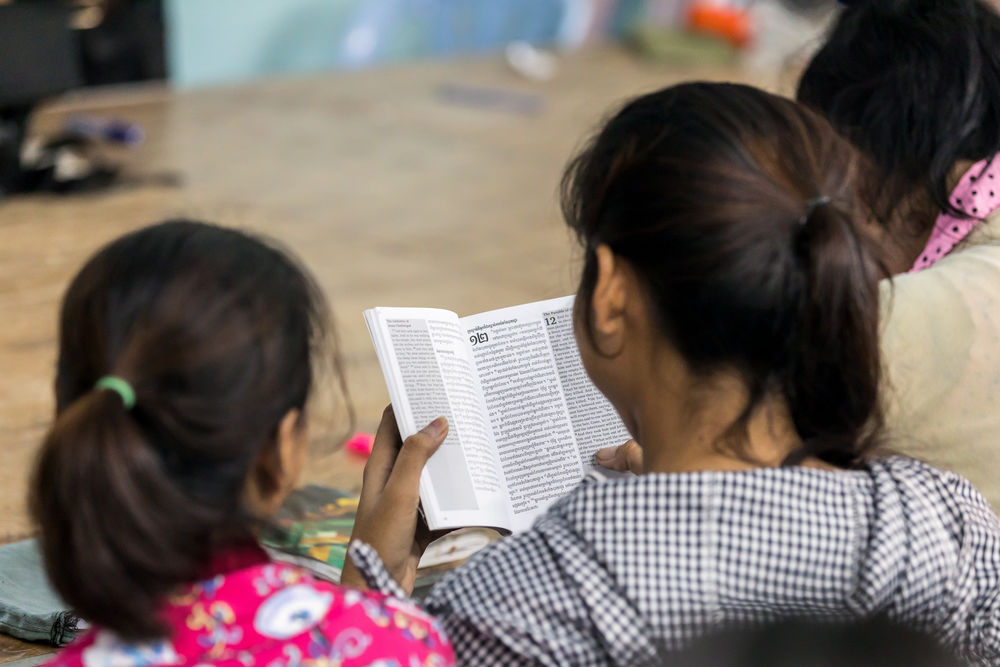 Sok Lai, 33, who has been at VillageWorks since 2008, said she has enjoyed learning about the Bible from OM MTI workers Dara, Phearun and others. She first heard about Jesus from a colleague at a previous job and started attending church then, but she has enjoyed the environment at VillageWorks—“it feels like a family”—and the spiritual input she has received there. “I hope the gospel can be spread to other people,” she said. “I want to share more as well.”

Mei Pum, 31, has worked at the factory for three years—her first job. The opportunity changed her life by providing new knowledge and skills, she reported. She also learned about Jesus from OM MTI’s English lessons. “I started to believe in Jesus when [the OM MTI workers] came to teach the Bible here,” she shared. “When I pray to God, He always answers me.”

Mei’s new faith has been built up by others at the warehouse who also believe in Jesus, and she has learnt new Scriptures from the English lessons provided by OM. Having an income has allowed Mei to purchase clothing and other necessities; knowing Jesus has made her happy and given her peace, she said.

For Dara and other OM MTI workers who volunteer to teach English through the Bible, the trip to VillageWorks requires extending their regular office hours, which begin at 7:00. “Sometimes, I’m really tired because I go [there], and I need to work there until night time, but I’m really happy because I can serve my people and share the glory of God with them,” Dara described.

Dara also recognised the difficulty of learning about Jesus in a Buddhist country. “The [employees at VillageWorks] don’t have opportunity to hear about God. If OM didn’t go, they would only go to work, and after work, go back home. …Their family practices the Buddhist faith, and they will follow it,” he continued. “But if we go, we are the light; we show the way to them.”

“We’re not pushing them,” Dara stressed. “They must feel free, but after they believe that God is really true, they go and get baptised also.”

Nicole James is a world traveller and writer for OM International. She’s passionate about partnering with believers to communicate the ways God is working across the globe