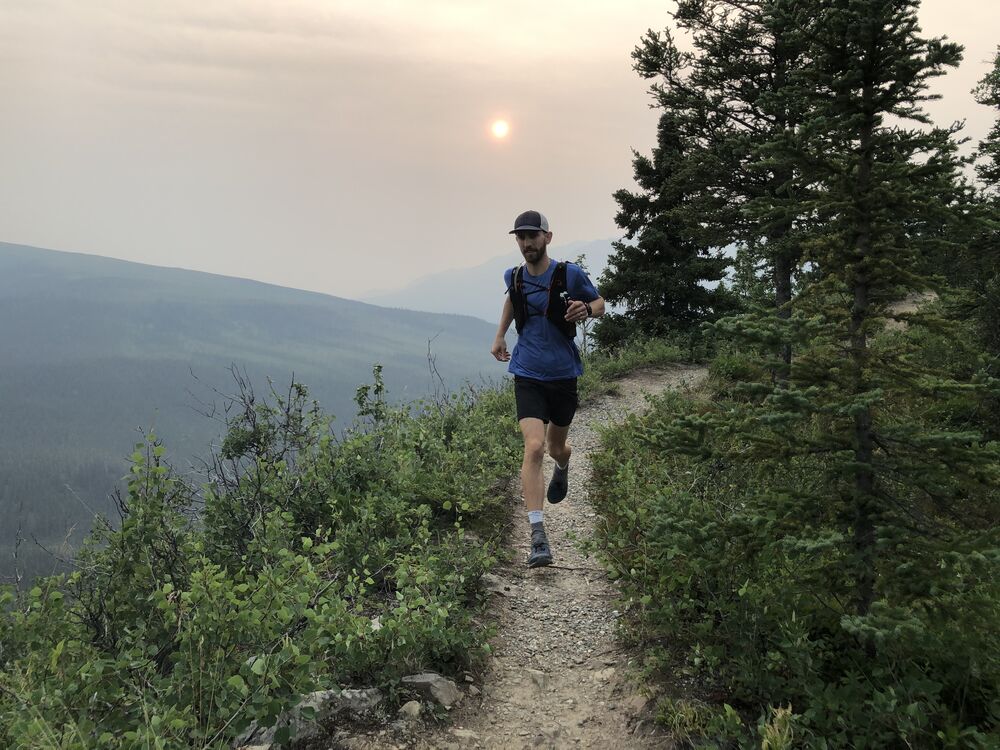 In August 2018, Garrett stumbled off a 14-hour flight from Central Asia into an airport terminal not far from where he lives in Houston, Texas. Instead of going home, though, he had an Uber deliver him directly to the starting line of a night trail run: his first race ever.

He’d begun running the year before, mainly to manage stress. Then, through his work in photography, he learnt about 100-mile races. “That’s when I got into the ‘ultra-world’ and became obsessed with that,” he said. Ultra runs are anything further than a regular marathon (42.2 km; 26.2 miles).

As an international photographer with OM, Garrett has served in over 30 countries. Despite his busy and unpredictable travel schedule, he found that his work came in waves, heavy at times then diminishing. Once his photos were edited and uploaded, he had little to do until the next trip. To fill his time and bolster his support, he got a part-time job at a popular US outdoor recreation store.

At the beginning of 2020, Garrett had lined up photography trips to five countries, starting in mid-March. Just before he was scheduled to leave, the new coronavirus, which had been largely contained to China and a handful of other Asian countries, exploded across the globe. As a result, OM banned non-essential international travel. “Hundreds of hours of work erased in a day and then put on pause for the indefinite future was pretty soul-crushing,” Garrett admitted.

His job at the outdoor store furloughed him for 90 days as well, thrusting him from managing an unpredictable life of “constantly uprooting yourself and never having consistency or a schedule,” as he described it, to staying home.

Naturally, Garrett turned to running. First, he set a personal record for his mile time; the next week, on a whim, he ran a half marathon (21km; 13.1 miles) faster than he ever had. Then, he decided to take on a challenge popular amongst the ultra crowd: run four miles every four hours for 48 hours.

One friend suggested turning the challenge into a fundraiser. The same day, he received an email about OM’s response to the coronavirus and how to donate. Garrett emailed his family and network to invite them to sponsor him.

Then he opened his emails, where responses had begun trickling in. One contact pledged $10 USD per mile. Another friend, a runner, “who doesn’t have any money” promised $1 USD per mile, Garrett shared. An older lady he knew told him she couldn’t give, but she’d pray for him.

As Garrett continued to run every four hours, his network sustained him. “The harder it got, the longer it got, the more people that gave, and I think I raised over $1,000 USD,” he said, adding his pledges together (He doesn’t know the exact amount because people donated directly to OM.).

Originally, Garrett wanted to complete the challenge to “get that ultra experience,” he said. But as he ran, God reminded him of the believers he had encountered in other countries. He prayed for friends overseas by name. He meditated on passages in Romans and James, pondering how perseverance and endurance build character and hope. Ultimately, the run “was really to share in the suffering with brothers and sisters in Christ, to do something for them, to pray for them,” he said.

Garrett has a clear memory of his first camera: a yellow and green children’s Crayola Flash camera for 110 film. After that, he doesn’t remember ever not having a camera in his hand. Photography “was not a hobby that I ever picked up; it was something that was always there,” he explained.

“I went to university for photography, and that’s where the God story started, especially with photography,” he remembered. “It was at a super young age … when I was baptised and became a Christian, but it wasn’t until college that I actually learnt what it meant to walk with Christ and have a relationship with Christ.” A close group of believing friends poured into Garrett’s life and helped refine him into the person God created him to be.

That same year, he interned with OM in the Middle East, where God broke his heart for people. His time there impressed on him the importance of documentary photography and portraiture—to “be eyes for people to see what it’s actually like in other countries and how people need to know about Christ. People need to know truth,” he emphasised.

Today, pictures hang from a string on the wall in his home office—a pastor serving on the frontline of the war in eastern Ukraine, a Rohingya refugee in Bangladesh, a boy kneeling inside a mosque for noon prayers in Central Asia. They are reminders of some of his craziest trips, the images that “leave a mark on my soul,” he said.

The response to his photographs is often the same. “I always get the feedback: ‘Oh, I had no idea people lived that way,’” he shared. “It’s an affirmation to be eyes for people that can’t go and see… It gives me so much joy to take images that I know will directly impact people.”

With all his photography trips on hold for the foreseeable future, Garret is focussing on being a light to his neighbours and waiting for the day when he can welcome his community back into his home. “For an extrovert…, it’s been hard to have everyone that is closest to me be like: ‘No, I can’t hang out,’” he said.

“But I’m just resting in the fact that this is not new to God. This is part of His redemptive story for His Kingdom,” Garrett said. 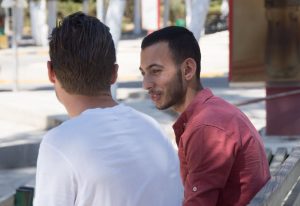 Personal Assistant for AIDSLink Director International    Go & Live    As soon as possibleOur AIDSLink vision is to see hope restored in individuals and communities, as we work together to overcome the challenges of HIV and AIDS. Our AIDSLink Director is looking for a detail-oriented individual who is gifted in administration to help ensure meetings, programs and the AIDSLink office operate efficiently. If this sounds like you, consider using your skills and talents to ensure every facet of this ministry is accomplished with completeness and attention to detail.
Full Details
Administrator International    Go & Live    January 2023MediaWorks is looking for an Administrator to support their creative media ministry. Use your administrative skills to be part of communicating  God’s love through print and digital media.
Full Details
International Finance Training Manager International    Go & Live    As soon as possibleWe have an urgent need for a person with excellent training skills. It would be great if you have knowledge of accounting systems but this is not essential.  Someone who is passionate about finance, training and seeing people become followers of Jesus. In this key role, you will help OM around the world impact the kingdom of God by developing and providing high-quality financial training throughout OM to all personnel involved in Finance.
Full Details
Short-term Project Mobiliser – Inspiro Arts Alliance International    Go & Live    As soon as possibleHelp mobilise artists into specialized, artistic short-term mission projects. Inspire, equip and connect artists globally into the right projects, internships and other short-term opportunities.

You can play a key part in building this global movement of artists on mission.
Full Details
Bookkeeper International    Go & Live    August 2023MediaWorks is looking for a bookkeeper to process the team’s financial transactions to ensure the smooth running and continuation of their media ministry. As you work in finance, you are releasing a team of graphic designers, software developers and content editors to produce and distribute media that share God’s love with the least reached in their heart languages.
Full Details
Identity Management (MIM) Engineer International    Go & Live    As soon as possibleAs an Identity Management Engineer your key function will be the successful planning and execution of OM’s Identity management strategy through the successful planning, deployment operationalisation and support of Identity management systems and services. You will use the Microsoft Identity Manager (MIM) solution to implement required functionality, policies and processes across a global and complex environment.

Would need to work where at least 2-3 hrs overlap with Europe is possible.
Full Details
Graphic Designer International    Go & Live    As soon as possibleAre you a detail oriented, self-starter with experience in graphic design?  Use your skills and abilities to design and illustrate promotional products and services that inspire involvement in ministry. OM’s Micro enterprise business ministry is passionate about helping people transform, uplift and empower their communities through business. Help us renew hope and see lasting change in peoples’ lives.
Full Details
B4T Developer International    Go & Live    As soon as possibleAre you an experienced business owner or manager? Would you like to use your business skills, experience and contacts to build entrepreneurs?  Join us as a B4T Developer. You will work to grow Kingdom Businesses in some of the most needy parts of the world. Select entrepreneurs, train them in business skills, bring in investors; it is a tough job and not for the faint hearted. Our vision is to see Kingdom Business fulfill its vital role in the Great Commission.
Full Details
Database Administrator (IT) International    Go & Live    As soon as possibleReporting to the Head of the IT Infra Team in this newly created role, you will be responsible for the management and maintenance of database systems (Microsoft SQL, Azure SQL, MySQL & PostgreSQL) across our entire estate.
Full Details
IT support person International    Go & Live    January 2023MediaWorks is looking for an on-site IT support person to ensure the smooth running of their print and digital media ministry’s infrastructure. As you support a creative team of graphic designers, software developers and eBook programmers, you are making it possible to produce Christian media in the heart-languages of the least reached around the world.
Full Details
Incarnate Manager – Inspiro Arts Alliance International    Go & Live    As soon as possibleDo you love to organize complex events? Can you imagine touching every corner of the globe with beauty by helping equip artists to serve cross-culturally?

We’ve got the program and connections. We need a manager to make it work smoothly and efficiently. Could that be you?
Full Details
Media Administrator International    Go & Live    August 2023MediaWorks is looking for a Media Administrator to support their creative media ministry. Use your administrative skills to share the hope of Christ by making resources available for the least reached in their heart languages!
Full Details
All Service Opportunities
All Visit Opportunities