During the past five years, OM has partnered with more than 40 churches in the Near East with over 20 projects. “We were able to join what God was doing to redeem this awful situation in really significant ways,” the OM Near East Field Leader said. Twenty-five to 30 OM workers directly serve refugees through income-generating projects, children’s programmes, visits and education. OM continues to fund partner churches that distribute food to those with the least access and greatest need.

A kids’ club for Syrian refugee children started at a local church with initially 10 Syrian children. Within two months it grew rapidly to 66. OM team member George* saw that a number of the refugee children were unable to read or write and began teaching them literacy skills.

Afterwards, some of the children encouraged their parents to go to the church despite some of the adults’ objections. “These are great people” they said.  A mother and her children were deeply touched by the outpouring of love they found at the church. 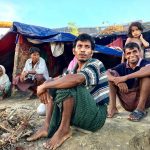